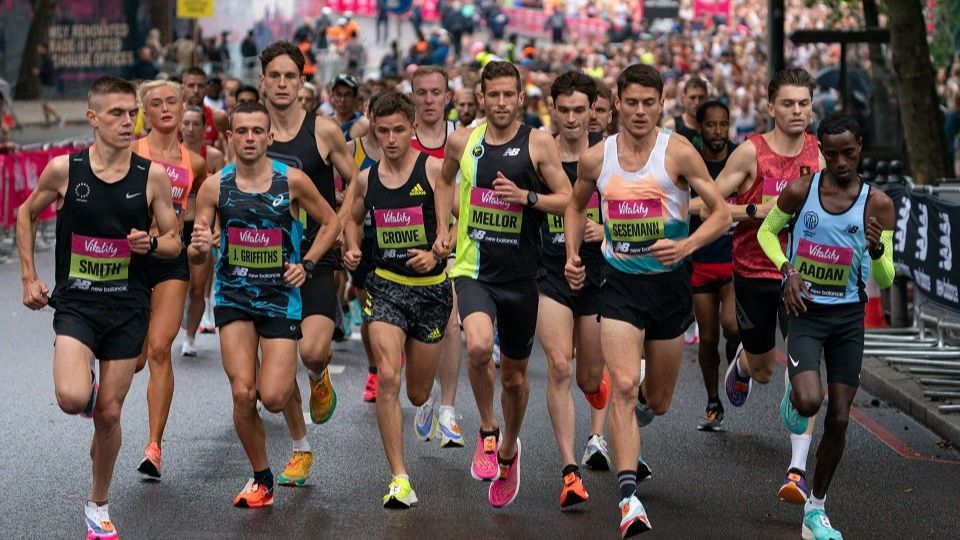 Smith and Purdue dominate The Vitality Big Half

More than 10,000 competitors battled for Big Half glory in London

As suggested in our preview The Vitality Big Half was a battle of Britain between some of the very best endurance runners around at present. The race was also a huge community event with packed crowds in support, especially around the spectacular finish beside the Cutty Sark in Greenwich on Sunday (22 August).

Britain's leading World Half Marathon Championships representative from last year, Jake Smith (Cardiff) confirmed his 2020 breakthrough form with victory in London's Big Half in 1:02:06, while Charlotte Purdue (Aldershot, Farnham & District) set a new course record of 1:09:51 to claim her third Vitality Big Half title – the first athlete to have achieved that milestone.

Jake Smith (pictured above, far left) was pressured by Jack Rowe, Mohamud Aadan, and Phil Sessemann until the nine-mile mark when he finally broke free to win by five seconds from the dogged Rowe (Aldershot, 1:02:11 PB). Aadan (Thames Valley Harriers, 1:02:28) clipped two seconds off his PB in third place.

Smith's verdict was upbeat: “It’s incredible to be back on the streets of London. Over Tower Bridge, I couldn’t hear myself breathe as the crowds were so loud, which was amazing.”

Purdue was delighted with her first race since pre-pandemic times, as she explained: “It was my first race in 17 months because I’ve been injured and had a few issues, so to get the win is more than I could have asked for. Samantha took off really hard, so I hung back a bit at the start and I’m glad I did because I felt quite tired by the end!"

More than 3,500 runners took part from local community groups, celebrating the diversity of London and the four London boroughs the race passes through, namely Tower Hamlets, Southwark, Lewisham, and Greenwich.