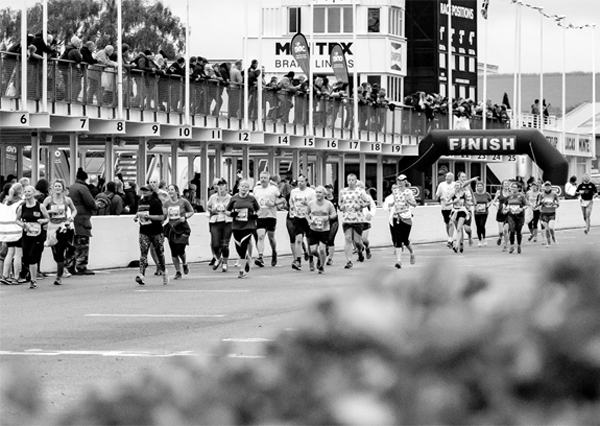 With 800 finishers across the two main events, the inaugural staging of The Running Festival at Goodwood on Sunday (14 October) has been hailed a complete success by the organisers UK Run Events, the events channel of #UKRunChat.

The wet and incredibly windy conditions did not prevent many runners from burning rubber to personal bests on the famous old motor racing circuit. Fortunately there was scant detail regarding any pit stops made en route!

Formula 1 might not have any female racers at present but F1 position at Goodwood was occupied by Naouele McHugh (Portsmouth Joggers, 44:15) who was joined in the champagne spraying positions by Hannah Jordan (Devizes RC, 45:41) and Emma Wickens (W45, 46:34).

Next on track was the endurance racers in the half marathon, covering five and a half laps of the historic venue. Hopes for a grandstand battle were dashed early on as prolific race winner James Baker (M40 Chichester Runners, 1:14:14) forged a three minute margin of victory from Chichester team mate Chris Bird (1:17:12) and Matthew Dennis (Tonbridge AC, 1:18:39).

The RNLI was the official charity for the event and post race social media comments were positive, prompting this response from @UKRunEvents on Twitter: “A HUGE thanks to everyone today who ran, volunteered, worked, supported, cheered & made today such an amazing day for everyone involved. Weather was challenging! So much love on social, we love you all”.