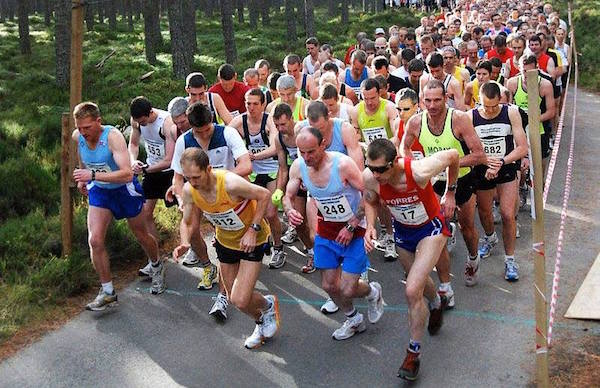 All in at the Aviemore Half Marathon and 10K For All

All eyes were on Aviemore this weekend, as over 1700 runners took in the stunning views of the Cairngorms and Loch Morlich in the Aviemore Half Marathon and 10K For All

The longstanding event is a fundraiser for the Speyside Trust, which offers short-break care holidays to people with disabilities at their Badaguish Centre.

First runner home in the 10K was Kane Elliot (Falkirk Victoria Harriers), just a whisker under the magic 30-minute mark (29.55). Inverness Harrier Donnie Macdonald followed behind for second just over a minute later (30.58). Hamish Battle, winner of last weekend’s Bennachie Hill Race, showed his skills on the road with a third place finish (31.54).

Tammy Wilson of JSK Running Club took top honours in the women’s division of the 10K (36.46), with a good return to form after injury. This was the first race for Wilson, a jogleader with jogscotland kintore, in 14 months.

Speaking to RunABC Scotland Online after her win, Wilson said: “I’m elated! Today went better than expected. I’ve had no structured training, and my running has been on and off – with my miles basically made up of my JSK sessions.

“I wasn’t planning to attempt a race today, but after doing the North District XC relay yesterday, I had a little fire in my belly!”

Garscube Harrier Ellie Hinks was second in the women’s division of the 10K (38.11), with Emma Sutherland hot on her heels for third (38.18).

First across the line in the Half Marathon was Greg Shearer (North Highland Harriers) in a time of 1.13.10. He was followed by Andrew Rolland and Thomas Doney (Metro Aberdeen), with times of 1.13.25 and 1.13.47 respectively.

There was a bit more breathing space between the women’s top three in the 13.1, with Charlotte Taylor-Green breaking the tape at 1.16.28, over four minutes ahead of second place Catriona Morrison (Stirling Triathlon Club). Third place went to Fife AC’s Sheena Logan (1.21.02), just weeks after her win at Baxter’s Loch Ness Marathon, and less than two months after her win at the Great Aberdeen Half.

Image Aviemore Half and 10K For All