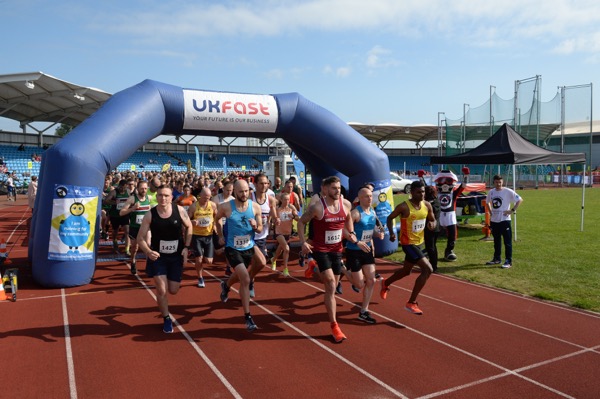 The UKFast City of Manchester 10K celebrated another great renewal on Sunday (7 July) as over 1300 runners made their way to Manchester’s Etihad Stadium for one of the recently established Running Bee Foundation's top races. The closing mile of the event was dedicated to Mo Done, the inspiration behind the foundation and a true advocate for health and running.

The foundation, founded and supported by Sports Tours International, provides grants from the profits raised from all its UK races to give to community initiatives across Manchester and the North West, and help to promote health and wellbeing and the fight to tackle and reduce childhood obesity.

Manchester-based cloud provider UKFast was the official sponsor of the UKFast City of Manchester 10K for the 4th year. UKFast wellness coach Joe Wright led the race’s warm up and took part in the run with UKFast’s team.

Mohammed Abu-Rezeq added another win to what has proven to be an incredible season: the Altrincham runner has secured victories at the Asda Foundation Leeds and Hull Half Marathons, Tour of Tameside plus the Cheshire Arley Hall 10K.

This year has seen him produce some of the strongest running of his career, with a PB over half marathon distance (1:04:28 at Chester in May) while he came within seven seconds of matching his best 10k time, which stands at 29:11.

It has been a similar story with Kirsty Longley, who once again stamped her authority with a convincing victory in 35:29, Carol Parsons (36:53) and Rachael Rozhdestvenskaya (39:56) were second and third respectively. Longley has now recorded wins, among others, at the Chester and Four Villages Half Marathons and the Mersey Tunnel 10K.

After the race, the Liverpool Pembroke & Sefton athlete, commented: “Just one last climb, Manchester 10K! Last workout & happy to defend my title! Matched exactly same time as last year! 35.29 on a tough course! Love this race so much”

Yet the race was as much about the important part the 10k plays in charitable causes. Stephen Owen at Running Bee Foundation said: “It was great to welcome so many runners and supporters to Sunday’s UKFast City of Manchester 10K – the event was a huge success! I’d like to thank everyone who ran, our supporters and partners, our volunteers and all who cheered on their loved ones on. Your support is enabling the Running Bee Foundation to help projects in Manchester.”