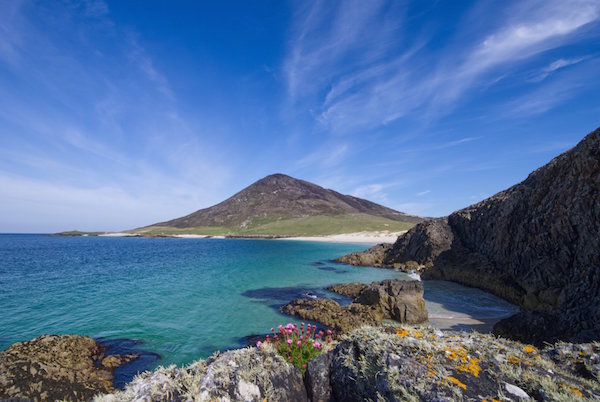 Harris Half brings 30th Heb3 series to a close

Following a very disappointing spell of weather since the beginning of June, summer returned to Harris at the weekend for the Island’s fifth half marathon.

Runners praised the event and its organisation on social media, with one participant saying the island route ‘must be the most beautiful course anywhere’.

Organisers of the event took inspiration from the beauty and artistic talent on the islands when sourcing prizes and mementos. This year’s main awards were made especially for the race by the Isle of Harris Handmade Glass Company. Candle and fragrance company Essence of Harris, who sponsored the team prizes, also created a commemorative candle for runners to purchase on the day.

Overall winner for the second year in a row was Ewan Crawford (HBT), who crossed the line in 1.17.26. First female and eighth overall was Sarah Attwood (Skye & Lochalsh RC), in a time of 1.29.18.

Saturday’s race also brought to a close the 30th edition of the Heb 3 race series, organised by Stornoway Running and Athletic Club. Runners who completed at least three of the five Hebridean halfs – Stornoway, Benbecula, Skye, Barra and Harris – received a technical T-shirt with a Heb3 logo specially designed by Iain Bom Mackay of SRAC. Runners who completed all five events earned the same shirt, but with the slogan “Rinn mise na coig” (“I did the five”), proudly emblazoned on the back.

Prizes were also awarded for the fastest cumulative times over the series, with the Harris winners – Sarah Attwood and Ewan Crawford – returning to the Heb3 podium. The winning team was SRAC.

Each of the Heb3 winners received hand-painted and stitched ‘Hebridean machairs’ made in Ness (Lewis) by Tiger Textiles.

Runners hoping to take part in the sold out event next year should mark their calendars now. The date is provisionally set for Saturday, 4 July, with entries opening in September.