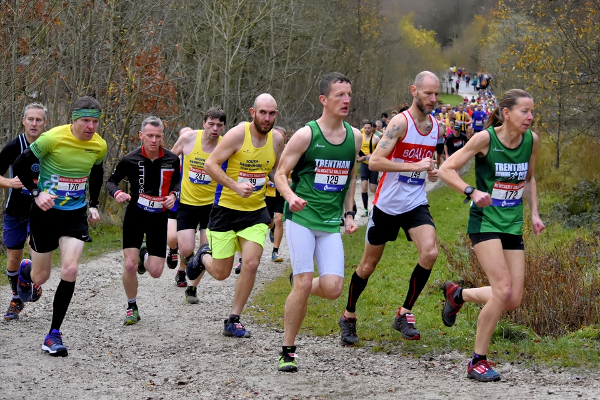 Wendy Swift lived up to her name at The Newcastle Dales Dash (Sunday 2 December). The Trentham RC runner was the first lady home at this tough, off-road 10K in Chesterton, Newcastle under Lyme.

The scenic Apedale Country Park was the location for the Dales Dash, a challenging race that tests end of season fitness levels. Now in its 15th year, it was organised by Newcastle (Staffs) AC and attracted runners from the Staffordshire running community and further afield.

Starting at 11am in front of the Visitor Centre, over 200 runners began the first of several climbs on a multi-terrain course consisting of limestone, grass, tarmac and a boardwalk. They followed an undulating route through Apedale, Lymedale and Silverdale before a gradual incline on tarmac to the finish.

Wendy Swift of Trentham RC sped across the line in 44:36 and was 23rd overall. She finished over a minute and a half ahead of Nia Rose Nokes of Stone MM who was second in 46:16. Amy Grace of South Cheshire Harriers was third in 46:59.

There were prizes for the top three and age category winners, and four ‘Margaret Barker’ trophies. These are a tribute to the late Margaret Barker from her friends at Apedale Heritage Centre and Newcastle (Staffs) AC. They were awarded to the winning lady (Wendy Swift), first Newcastle lady (Jan Cassidy) and the first U16 male and female (Bertie Warr).

The organisers would like to thank the Ranger Service, Newcastle Countryside Project, runners, marshals and volunteers for a successful event.