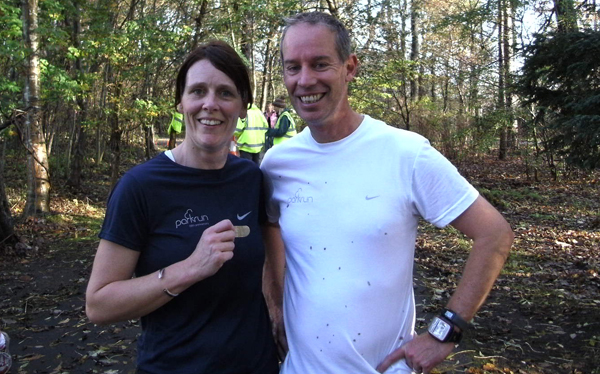 Parkrun in Scotland celebrated its 10th birthday in style on Saturday (1 December) at Pollok Park, the venue where it all began a decade ago.

A record field of 616 supported plus recognition by the Scottish parliament - parkrun was mentioned in despatches - meant a memorable landmark occasion for what is now a sporting institution across Scotland with 43 Saturday runs and 14 junior Sunday runs.

There were even calls for Richard Leyton, who was the driving force behind the establishment of the Pollok event, originally called Glasgow parkrun, to be awarded an Honour!

The huge turnout was in celebratory mood throughout after being sent off to the sound of pipes and drums. Andrew Grieve (17:05) - making his parkrun debut - showed the other 600 runners the way home while Toni McIntosh who has featured regularly in the Pollok roll of honour over the event's history was fastest lady in 19.08. Tailwalker Anne Macfie collected the day's last token closing Pollok parkrun number 510 on 46:39.

Anne was one of a record volunteer team of 43 which also included Richard Leyton and Frances Flood who were part of the volunteer team at the first parkrun. Carlos Gonzalez, who created the very successful 10 for 10 parkrun challenge in April was also on duty.

Worries about poor early winter weather proved unfounded and Mhairi Gervais in her race report caught the mood of the day: "There was a lovely atmosphere round the park today. Even the drizzle (someone told me it did rain a little…) couldn’t dampen the parkrun spirits."

Over 19,000 individual participants have been involved at Pollok parkrun across 10 years including course record holders Luke Traynor and Freya Ross.