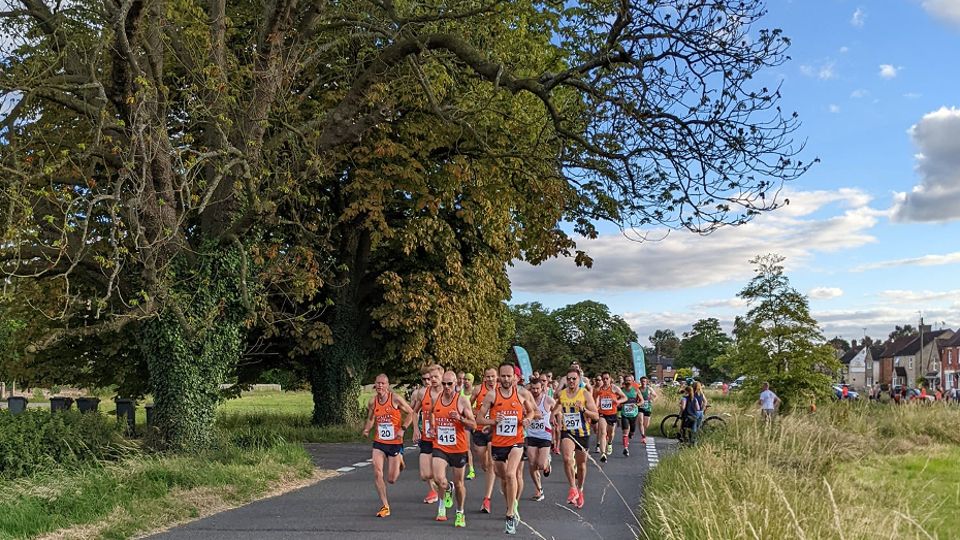 The men’s and women’s winners at this time trial style race.

Thirsty work for runners at Monday’s (4 July) Frampton 10K as they went hard and fast in this evening race for individual and club glory. Gemma Collier more than earned her finisher's cider after running 10K in the Masters International Road Race the day before.

Bottles of Aston Manor cider were handed to runners at the end of this popular race that is one of six organised by Stroud & District AC. Local clubs were well represented with vests from Gloucester AC, Western Tempo and Dursley AC amongst others on display. Runners gathered in one of the four waves ready to begin at this time trial format event - the wave start was retained after being used to great success at the 2021 event.

The first wave (predicted finish under 45 minutes) started at 19.30pm followed by the rest via a rolling start. It was chip timed only – no gun time. Held on open roads, runners followed a delightful route around Frampton on Severn before revving up for a sprint finish on the village green.

Lee Stopford of Stroud & District AC was first home in 31:49. It was Western Tempo taking second and third with Ben Price finishing in 32:04 and Richard Dare in 33:10.

Gloucester AC’s Gemma Collier made her debut for England as they took on Wales in a highly competitive 5K, 10K and Half Marathon. 24 hours later she ran the Frampton 10K and finished the winner in 37:22. Jenny Gardner of Dursley RC was second in 38:22 and Kimberley Newcombe of Stroud & District AC third in 38:41.

A full set of results can be viewed via the runABC Midlands Race Listings page.

A PB followed by a bottle of cider to celebrate. What's not to like?