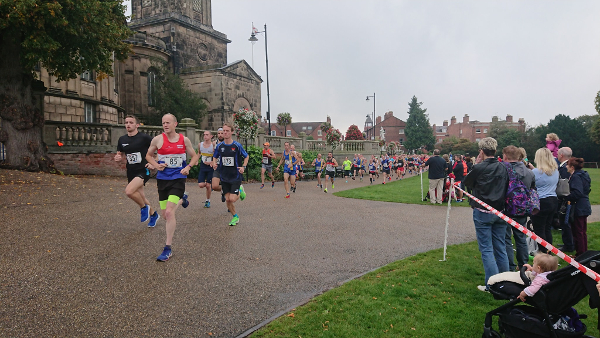 Around 400 runners went with the flow at Sunday’s (22 September) Shrewsbury Severn Bridges 10K. They managed to keep their feet dry as they criss-crossed over the river.

There were no bridges over troubled water this time unlike last year when the race was cancelled due to rising river levels. A combination of deferred places and demand resulted in a sold out event that was efficiently marshalled and well supported throughout.

The 10K was organised by Shropshire Council with Sean McCarthy as the race director – a familiar role for him. Shropshire Shufflers provided the marshals as they have done so from the very first race and were managed by club chair Nick Pollock.

At 10am the runners were sent on their way from the Quarry Park along an unusual route, twisting and turning around the town. They crossed the English and Welsh bridges, Kingsland Bridge and others over the River Severn, passing several landmarks on their way. Not the easiest of courses that required 50+ marshals all of whom were knowledgeable and encouraging.

Philip Boak was the winner in 33:12 – over two and a half minutes ahead of Philip Jones of Shropshire Shufflers who was second in 35:46. Andrew Jones was third in 36:31.

Things were closer in the women’s race with Jemma Brown winning in 43:05 followed by Emily Sanders in 43:20. Naomi Cook of Shrewsbury AC was third in 43:38.

Amongst the finishers was Christine Ivison who co-founded Shropshire Shufflers in 1981. She crossed the line in 1:02:15 and was first in her age category (V65).