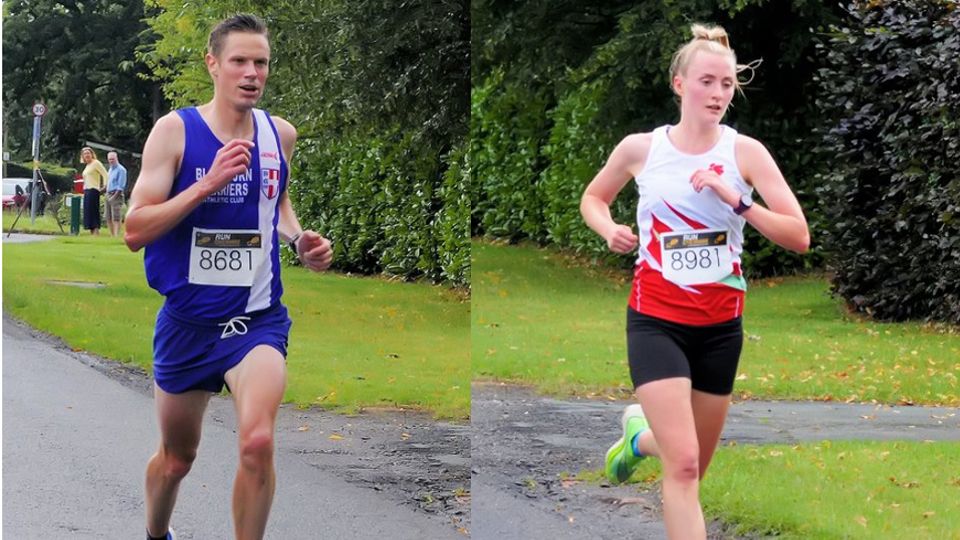 They raced to victory along Cheshire’s country lanes that included views of Jodrell Bank.

Ben Fish and Hannah Cowley ended the month on a high note with wins at the Colshaw Hall 10K (Sunday 31 July). They made the most of the closed road course in attractive surroundings with the Lovell telescope an impressive sight in the distance.

The famous telescope was one of several aspects at this well organised race from Run Cheshire & Gogledd Cymru where finishers received an outsized, equine themed medal that is always a vote winner. The design relates to Colshaw Hall – a Grade II listed country estate which is a popular luxury wedding venue near Knutsford, Cheshire.

Conditions were wet and humid as runners, many from North West clubs, collected their numbers then warmed up on the estate road prior to the start at 9.30am. They lined up then “5...4...3...2...1” and the air horn sent them on their way along leafy lanes in and around the village of Over Peover. Marshals guided them and locals clapped and cheered as they passed.

The course was one of the most scenic for a race. There was a hill after a mile and another further on at around 4/5 miles but nothing major and the water station at 5K took care of hydration needs.

Ben Fish of Blackburn Harriers & AC looked strong and focused as he led the way through picturesque areas to be first across the finish line in 31:13. Daniel Cliffe of Hercules Wimbledon AC followed him in 32:07 with Richard Coen of Wilmslow RC third in 33:44.

A controlled display of running from Cheshire Dragons Hannah Cowley saw her become the women’s winner in 38:03. Vicky Bryant of Wigan Phoenix AC was second in 38:45 and Faye Sharpley of Macclesfield Harriers & AC third in 40:33.

View all the results via the runABC Race Listings.