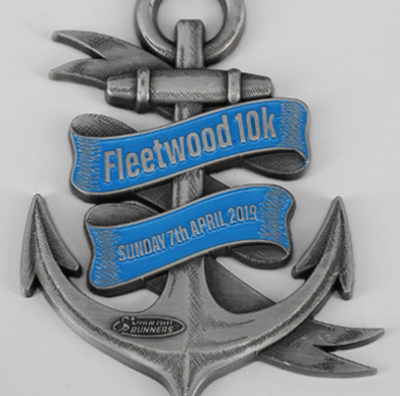 Over 300 got up to speed at Fleetwood

There was no coasting along for runners at Sunday’s (7 April) Fleetwood 10K. They made the most of the new, fast course along the prom.

A new route, team of pacers and a unique medal were a few of the seaside specials at this shoreline run organised by Fylde Coast Runners. This is one of several events in that area that include the Blackpool Festival of Running, the Windmill Half Marathon and the Fairhaven Flyer 10K – all of which take place on (or near) the coast.

Chilly sea breezes greeted runners as they congregated at Rossall Point on the outer pathway, ready to start at 10am. They soon warmed up as they set off past the Watch Tower and proceeded on a flat route along the Promenade and the Esplanade with scenic views across Morecambe Bay. The runners continued along the Outer Promenade and towards the finish in Marine Hall Gardens.

Josh Birmingham of Bury AC won the men's race in 34:21, over three minutes in front of Ryan Harbour who came second in 37:25. Close behind him was James McLeod of Accrington Road Runners who took third place in 37:27.

Every finisher was presented with an anchor-themed medal that was in keeping with Fylde Coast Runners reputation for top quality ‘bling’.