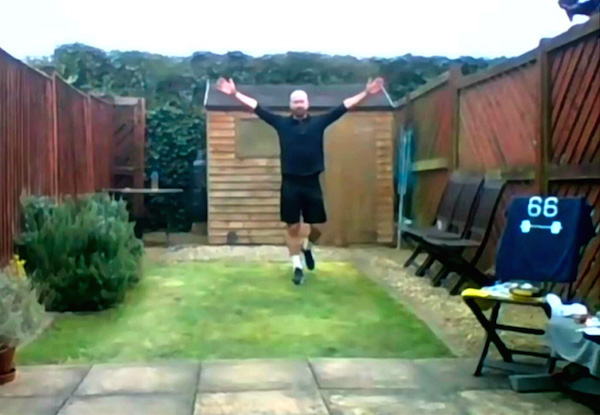 The six metres raising tens of thousands for the NHS

Donations continue to roll in for the Scottish javelin thrower who completed a marathon in his back garden last week.

The former Glasgow 2014 Commonwealth Games athlete and Scottish record holder James Campbell has now raised over £29,000, plus another £3,000 in Gift Aid, for the NHS. Nearly £5000 was donated before he even began the run, which was streamed live on Vinco Sport.

In total, Campbell spent just over five hours running shuttles of his six-metre-long garden to achieve his goal – smashing his original estimate of six and a half hours to run the 26.2 miles.

He told BBC Scotland, "The amount of people supporting it and the positive messages from everyone, it's been an incredible response. The feeling at the end of it was probably by far the best feeling I've had.”

In addition to raising vital funds – on his 32nd birthday – Campbell hoped that his efforts had given folk a brief respite from the challenges they're facing because of Coronavirus.

He added: "Whether you're directly affected, someone you know is, or you can't work, it's going to take a toll on everyone. I'm not advising people to run up and down their garden for five hours, but it's a strange time and I hope it gave everyone a break from a lot of the bad news going around."

The #6metregardenmarathon started life on Monday, 30 March, as a tweet in which Campbell promised his followers he would run a marathon in his garden if he got more 10,000 retweets. The rest is history.

A few days after his marathon effort, a 'blown away' Campbell wrote on Twitter: “Can’t really express how grateful I am without saying it to everyone individually but I hope you have some idea.

"Thank you so much for being so generous with the donations & support. I hope you all stay safe & in good health & I’ll be sure to let you know next time I get bored enough to tweet something stupid.”