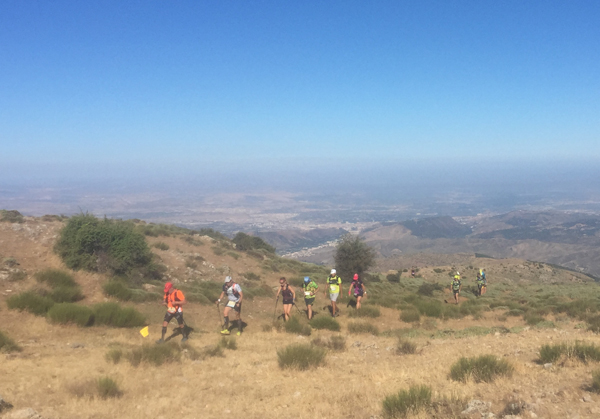 High On Running In The Sierras

A glance at some pictures of the course of the Sierra Nevada Ultra race, whose fifth edition took place in July (14/15) might give participants the idea that they’re in for a day of sightseeing (writes Doug Smith). Taking runners past sights like the stunning Alhambra Palace, some postcard-ready mountain villages and the snow-dusted peaks of the Sierra, there surely can’t be many more stunning races.

Perhaps these were the main factors in tempting my group of three friends to swap the streets of Glasgow for the slopes of Granada. However, the respective 6060m, 3710m and 2730m cumulative ascents of the 100km Ultra, 62km Trail and 40km 'marathon' should perhaps hint that organisers are focused on more than a beauty contest.

There’s also a 6km city fun run in the hours before the main events, giving the occasion a real party feel as we picked up our marathon race packs amid spectators cheering and ultra runners preparing (some with beer and tapas!) for their midnight start. Though we were tempted to hang around, our own 5.45am bus to the marathon starting point meant our team of three chose rest over fiesta.

As we waited in the small town of Quéntar, close to the city of Granada, for the 7am klaxon, any moaning about the early rise ceased as we watched the headlights of the ultra participants bobbing through the forests far above, seven hours into their own race.

Setting off, we were almost immediately into the first big climb after a brief downhill from the village. Under a canopy of pine trees, the marathoners caught glimpses of the growing dawn as we took on the first of five major climbs. Although in this part of Spain the sun can be oppressive, as we broke out of the rocky forest and took on our second, longer and more exposed climb, the early light turned out to be more encouraging than threatening. Though given my vest-shaped sun tan, I might campaign for an application of factor 50 being added to the list of obligatory equipment.

After a challenging rollercoaster first half of steep ups and careening downs past lakes and cliffs, we reached the halfway-ish aid station in the hamlet of Güejar. The enthusiastic volunteers and barrels of isotonic drinks were more than a match for the murmurs of aches and pains beginning to make their presence felt down below.

The second half of the race however, is more of a relentless climb through woods, technical crumbling paths, and a fair stretch of road running which might have finished a few of us off if the afternoon temperature had climbed just a few more degrees. One of my running group came startlingly close to falling over the edge of a crumbling path, a reminder that this race demands concentration as much as fitness.

Yet here, as throughout the route, the torture of the terrain is offset by one glance to the side or behind, at the plunging green valleys or the glistening mirage of Granada’s fairytale sprawl miles below. However, this I will say; the tall, steep ramp placed a few yards from the finish line seemed almost designed to produce last-second retirements. We made it though, propelled over the line by the enthusiastic cheers of the recently finished and the proudly awaiting.

In a race such as this, it’s possible to run with the same group of strangers for hours at a time, often in silence. A highlight for me was language-barrier breaking high-fives, fist bumps and satisfied nods of respect amongst the exhausted finishers of all distances, everyone seemed delighted with the achievement and ready to enjoy the view.