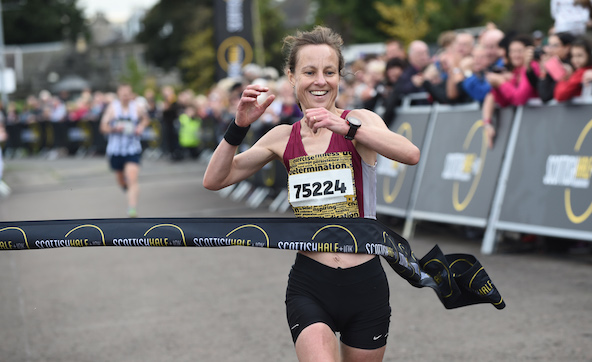 The favourable elevation profile of the Scottish Half Marathon and Scottish 10K routes have attracted plenty of competitive club runners in recent years, and this year's is set to see some great battles unfold.

The 'ones to watch' in the Half Marathon on Sunday include 2016 champion Dianne Lauder, who has a season's best of 85:18 from the EMF Half Marathon in May; some way off her all-time best of 76:59. Edinburgh AC's Chloe Cox could challenge, having run 39:09 at the Stirling 10K last weekend. Her half marathon season's best of 84:25 just edges Lauder's. Cox's club mate Jacqueline Rainger could also feature, she boasts personal bests of 38:58 for the 10K, and 85:41 for the half marathon.

On the men's side, last year's third placer Andrew Powell of Sunderland AC returns for another crack at the title. Powell has a personal best of 70:47 for the half marathon distance, set at the Edinburgh Marathon Festival in 2016. Kevin Liddle of Garscube Harriers has raced sparingly this year but has recorded personal bests over both the half and full marathon distances, including 2:34:05 at London Marathon. Newbury AC's Alex Muir could pose a genuine threat having recorded a host of personal bests on the track this summer. The 15:23 5k man will be hoping to convert this form onto the roads on Sunday.

The 10K, which kicks off at 9am a couple of hours before the Half Marathon also has plenty of club runners vying for glory.

Shona Mcintosh of Hunters Bog Trotters leads the female entry list with a 76:45 half marathon best to her name this year, set in Inverness. She also clocked 2:45:09 at the Manchester Marathon in April. Edinburgh AC's Nikki Gibson has been racing regularly and could also challenge. Falkirk Victoria Harrier and 2012 Olympic marathoner Freya Ross makes a return to competitive racing having given birth earlier this year.

The men's race has plenty of local interest, with Edinburgh AC duo Leon Johnson and Stuart Johnstone set to battle it out; the pair finished just 13 seconds apart at the recent Stirling 10K. Morpeth's James Taylor could well be in the mix too having recently lowered his 5000m personal best to 15:26.

The Scottish 10K will kick off proceedings on Sunday 23 September, starting at 9am at Musselburgh Racecourse, before the half marathon gets underway at 11am from Meadowmill Sports Centre.