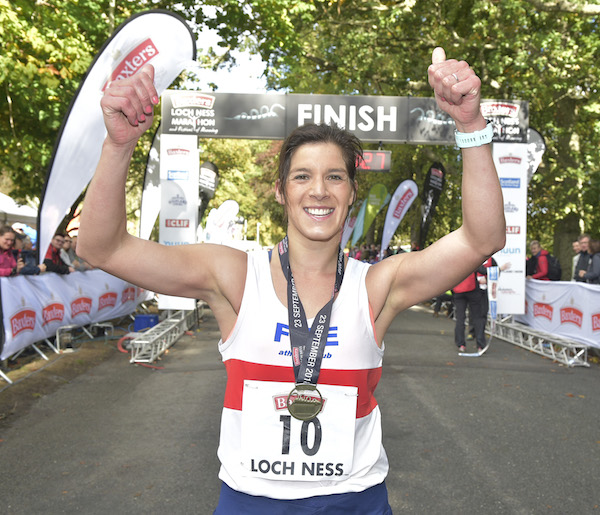 Sheena Logan set an impressive new personal best time of 2:51:11 to win the women’s race by finishing ahead of two-time previous champion Jenn Wetton (Central AC), who was competing nine months after giving birth to son Adam . Logan was following up her recent success at the Great Aberdeen Run Half Marathon.

The Fife AC runner, who looked remarkably fresh at the end of the contest, admitted to being shocked by her success but was absolutely delighted to have won.

She said: “I am stunned by the result, completely blown away, and I really enjoyed it. It’s an improvement of more than four mins on my previous best set before I had my children who are now aged 1 and 4.

Wetton, who recorded 2:53:19, was equally happy with the outcome.

She said: “I might need to reassess which is harder, childbirth or marathon running. On the basis of today I’d say its marathon running. I was so tired over the last mile but I knew my wee boy would be at the finish so that kept me going and made it special. I was as well prepared for the race as I could be at this stage and I really needed to do it as a target to help me get back.”

Hazel Wyness (Metro Aberdeen) picked up the over-40 award when finishing third overall in 3:00:27. She said: “I was fourth last year so it’s good to be in the top three, although I was hoping to be under three hours.”

Men’s marathon winner, the Jordanian Mohammad Abu-Rezeq, has set his sights on earning a place at the 2020 Tokyo Olympic Games after completing a hat-trick of wins at the event.

The Manchester-based athlete completed the course in 2hr 23min 56secs to finish well ahead of his closest challengers.

He said: “The conditions were good today and it was a very nice race. I like this course so much which is why I keep coming back here. It’s not an easy course and I know I can run much quicker.

“My big aim is to run for my country in the Olympic Games so I need to run under 2:18 at London and I am sure I can do that.”

The Devon athlete, who warmed up for the marathon by taking top spot in the previous day’s Inverness parkrun, said: “I am over the moon as that’s more than three mins I’ve taken off my previous best time. I didn’t ease back for this as I did two half marathons last weekend and the week before that I ran a 100km race. Next week I’ll be out doing a 100-mile race. Today was my 380th marathon or ultramarathon.

Over in the Baxters River Ness 10K, Kilbarchan’s Euan Gillham got the better of Moray’s Kenny Wilson in an enthralling battle for supremacy.

The duo were locked together in the early stages before Wilson pulled away, opening up what appeared to be a decisive lead. But Gillham, who was bronze medallist in the Scottish 10K championships at Stirling a fortnight earlier when Wilson finished fifth, gradually reeled in his rival and burst clear in the closing stages to win by 11secs in a personal best 30min 22secs.

Wilson, who is to represent Scotland in the Commonwealth half marathon at Cardiff next month, was disappointed not to win but took some positives from the outcome. He said: “When Euan went past I tried to hang on but just couldn’t do it. I was still quite close to my best time and it was an ideal workout in the lead up to Cardiff.”

Jenny Bannerman set a personal best time of 34:53 to score her third victory in five years in the women’s race. The Inverness Harriers club member sliced 14secs off her previous best and charted new territory by dipping under the 35min barrier for the first time. Edinburgh AC’s Ella Revitt was only a few seconds outside her personal best when finishing second in 35:35 while Rosanna Andrews (Rugby and Northampton) finished third in 37:08.

Entries for the 2019 Baxters Loch Ness marathon and festival of running taking place 6 October 2019 are open now at www.lochnessmarathon.com