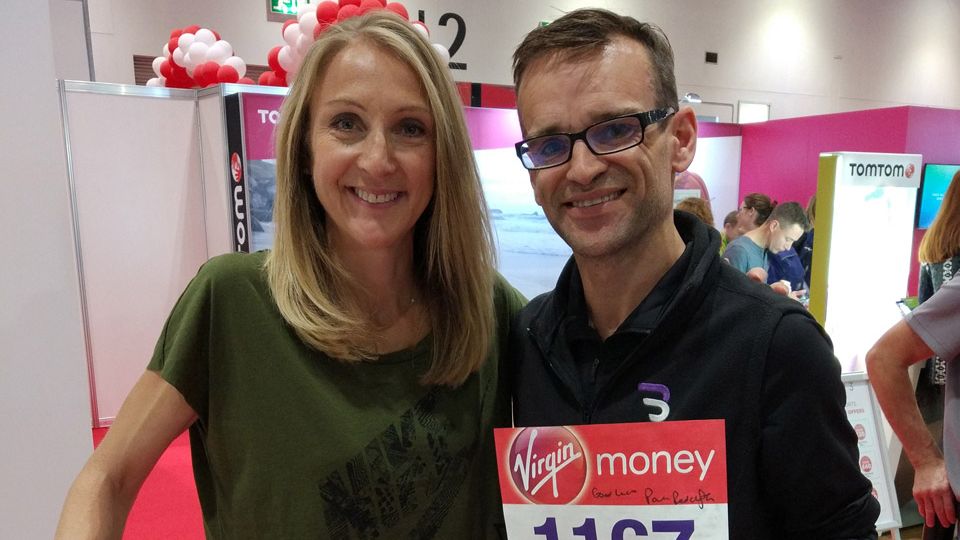 Russell warms up for the McLondon Marathon

Russell Whittington goes with Plan B after London Marathon 2020 disappointment

London Marathon regular and one-time world record holder Russell Whittington was disappointed by the recent announcement that the 2020 race was being restricted to an elite field. However the Glasgow-based man had a Plan B 'oven ready'.

Russell, a long-term Bellahouston Road Runner but now running in Giffnock North colours, has taken part in London Marathon every year since 2003 (with the exception of 2013 when his son was born) and was looking forward to another trip to the capital for the 2020 renewal.

As was the case for so many, coronavirus cast its dark shadow on Russell's plans. However he was already determined to make something positive of the situation.

Russell now plans to take part in London Marathon virtual race, scheduled for Sunday 4 October, the same day as the elite race is going ahead in an enclosed loop in St James' Park. He is currently finalising the 26.2 mile route he will run but plans to pass famous Glasgow landmarks like George Square, Hampden Park and Barrowlands. He’s calling his  'home-made' challenge The McLondon Marathon.

Russell will be fundraising for Glasgow's Children’s Hospital Charity as part of Barclays' (the company he works for) ambitious goal to raise £96,000 for a new state-of-the-art Fetal Cardiology Ultrasound Scanner to help care for unborn babies from across Scotland at the hospital.

Along the route Russell is planning to take 26 selfies of Glasgow landmarks which he will post on social media. He is hoping to raise £1,000 towards the scanner target.

A one-time Guinness world record holder – Russell and dad Jeff lowered the fastest time for a parent and child to an aggregate time of 5:42:01 in 2012 – he includes New York, Berlin, Havana, Valencia, Paris, Lake Garda, Belfast, Loch Ness and Edinburgh in his marathon CV. He also completed the legendary Comrades Ultra Marathon in 2005.

Russell told runABC Scotland: "I'm disappointed not to be running in London this year but really excited by my 'Plan B' challenge and the chance to support such a great cause.”