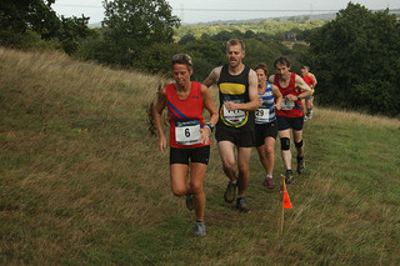 Runners rise up for the challenge of the Waseley Wobbler

Beauty and the Beast at Sunday’s (23 September) Waseley Wobbler as runners were presented with stunning views and steep hills in equal measures. Afterwardds tea and cake more than made up for the mountainous terrain.

The Waseley Wobbler enjoys a reputation as a tough, multi-terrain race with 1100ft of climbing and more than a few legs were trembling during the race and afterwards. Organised by Bromsgrove and Redditch AC, the event welcomed runners looking to take their first steps into fell running on a well-marked and marshalled course.

Located on the West Midlands/Worcester border the race began as a 15 miler in the early 1980s before being shortened to 10 miles then 8.5 miles in its latest incarnation. The route includes four major hills within an 8-mile radius with unrivalled views from the summit.

A small yet resolute field was ready for an uphill battle starting at 10.30am from Waseley Hills High School, Rubery, Birmingham. They looped around the Country Park, up through the woods towards the Lickey Hills then headed back towards Waseley with a final climb up the valley that proved to be painful on the quads.

Robin Biles of BRAT was first to cross the line in 61:21 followed by Mark Tanner of Bromsgrove and Redditch AC in 62:29. Michael Tompkins of Kings Heath RC was third in 65:50.

Finishers refuelled with tea or coffee and homemade cakes after a challenging yet enjoyable day.