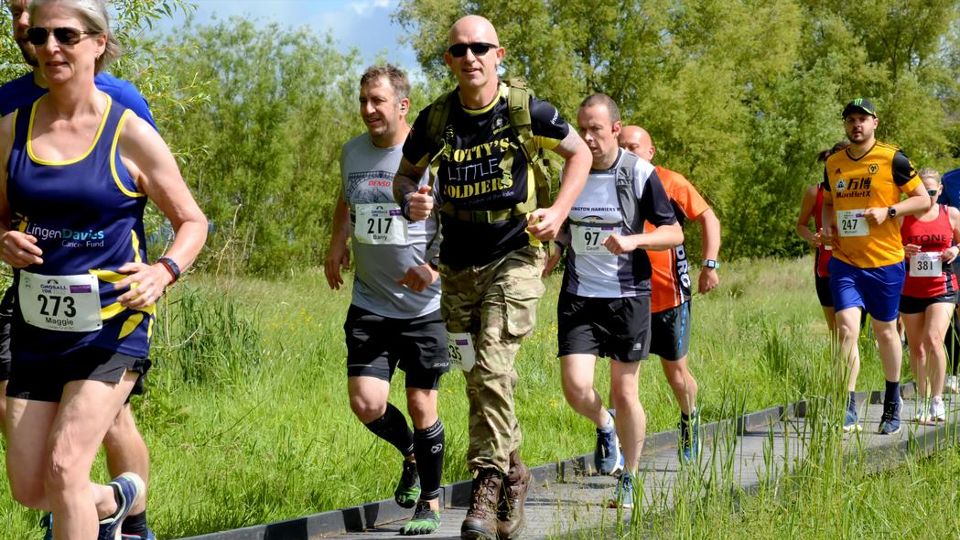 Giving it a good run at the Gnosall 10K

The Drifters sang “under the boardwalk” but 300 participants ran over it at Saturday’s (11 June) Gnosall 10K (ish) that made a welcome return to the racing fold. The attractive course and edible medals went down a treat at a well organised and supported event in the Staffordshire countryside.

It was a slick operation from Gnosall Globetrotters RC where every detail had been taken care of with route signage and marshals in key places to prevent anyone from going off course. There were prizes for the top three men and women; the Sam Myatt trophy for the fastest young runner (aged 20 or under), tasty spot prizes and sugar cookie medals courtesy of Baking at No42 by Sarah Day. Fine, dry weather was the icing on the cake.

The 10K (ish) or 11.2K (6.95 miles) actually, started at 10.30am from Gnosall Family Sports Club that also acted as the finish. Runners set off from there along an off-road, undulating course that included canal towpath, field tracks, farm lanes and ‘Route 55’ disused railway line not forgetting the boardwalk. There were plentiful marshals along the way, all with smiles on their faces as they encouraged the runners around and on to the end.

Jon Weavell of Stafford Triathlon Club was the winner in 42:45 followed by Andy Dunkerley of HMP Triathlon in 44:04. Martin Colwill of Bideford AAC was not far behind, finishing third in 44:15.

Rosie Silvester of Stafford Harriers was the winning female in 50:47. Abigail Wells-Day of Wolverhampton & Bilston AC finished second in 53:35 with Alison Kidson third in 53:50.

Amongst the competitors was Steve O’Connor in army boots and carrying a 35lb Bergen who was fundraising for the charity Scotty’s Little Soldiers. He finished in 1:19:15.

The complete set of results is available via the runABC Midlands Race Listings page.

The organisers thanked everyone involved including the sponsors, marshals, volunteers,
stall holders and runners – the latter vowing to be back in 2023.