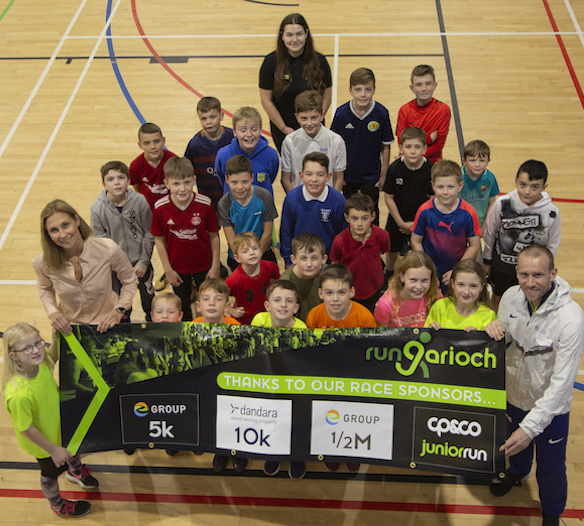 The young athletes of the Garioch Sports Centre’s Junior Running Club got a real ‘treat’ this Halloween week, when GB international trail runner and Run Garioch podium regular Kyle Greig put them through their paces.

The special session was organised to mark yesterday’s launch of Run Garioch 2019, to be held on Sunday, 24 March.

After taking the kids through drills in the Sports Hall and outside on the facility’s 3G pitch, Greig said: “It’s great to be back in Inverurie and especially to have the chance to run with some of the local running stars of the future.”

“Run Garioch is a great event and I’m very pleased to be a part of it.”

But the launch is not the end of the current Run Garioch half marathon champion’s involvement with the Aberdeenshire event.

Race director Graham Morrison, heading the race committee for a second year, said: “There are all kinds of exciting developments in the pipeline for next March, not least of which will be an enhanced training programme to help runners of all abilities get ready for race day.

“We’re delighted to announce that both Kyle and Stuart Amory – the Aberdonian personal trainer who just ran from London to Insch to raise funds for Mind – will be helping us with its design.

“And to encourage as many people as possible to take part in our event, entry fees for all six races have been held at last year’s levels.”

Morrison also announced that all the event’s main title and timing sponsors will be continuing their support of Run Garioch in 2019, even if some of the race names themselves are different.

Fiona Booth, managing director of the eGroup, said: “We’re very happy to be sponsoring Run Garioch for another year, which will be our first major event with our new eGroup branding.”

The popular running festival will be supported by six charities, all of whom have guaranteed entries. CLAN, Inspire, The Gathimba Edwards Foundation and Friends of the Neonatal Unit will return to provide essential race-day volunteers for another year. They will also be joined by new charity partners Charlie House and CHSS.

Dandara sales director in Aberdeen, Peter Best, said: “The event is a fantastic example of the local community coming together to support a range of charities in the North East. Dandara has sponsored Run Garioch since 2014 and we’re thrilled to be back for another year with the 10k.

All proceeds from Run Garioch support the running and development of Inverurie’s Garioch Sports Centre, a non-profit community facility.

Entries are now open for Run Garioch 2019 at the event website.