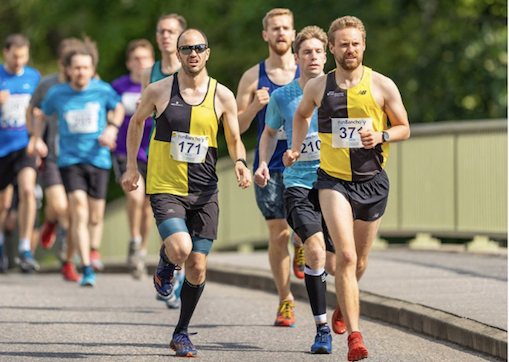 The only ups and downs at Sunday’s runBanchory were in the ‘undulating’ route, as the inaugural race was hailed a great success.

The race, which fully sold out its target of 400 places, lived up to its billing as a challenging multi-terrain 10k.

Starting in the King George V playing fields in the Aberdeenshire town, the route took runners on a journey up through the Scolty Woods and Blackhall forest before returning to the start.

Race director Scott Birse, a keen runner himself and owner of SB Fitness, told runABC Scotland online: “The event went really well considering it was our first year. The weather held up and we had 321 adults in the 10k and 71 kids in the 1K fun run on the day.

“I was delighted with everything in terms of marshalling, catering and spectator experience. The feedback we received regarding the event and the route was very positive. Although, I think the 'small hill' was the first thing they mentioned when they returned home!”

Local club Metro Aberdeen dominated the new event, unexpected hills and all. Their runners topped both the men’s and women’s podiums, and scooped the men’s team prize to boot.

The women’s race was won in some style by Ginie Barrand who just narrowly missed out on a top-10 overall finish. Her time of 41.21 put her in eleventh position overall, nearly two minutes ahead of the second female, Banchory-based Emma Roberts. Third lady home was Rebecca Watt.

The women’s team prize was won by Rebel PT.

Birse added: “Overall, I am very happy with the day and we will aim to improve it for next year with a few tweaks. I hope all runners had a very enjoyable experience!”