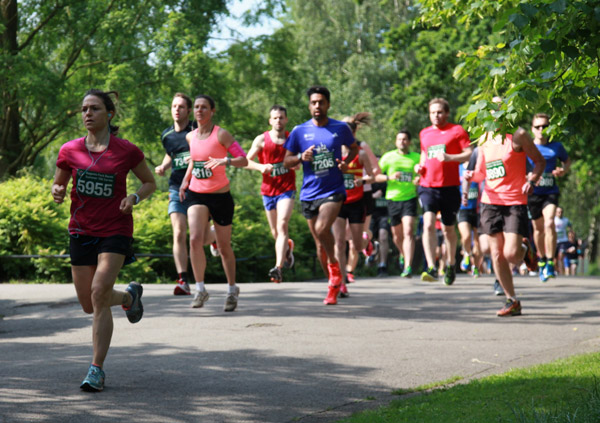 The event was again superbly organised by The Race Organiser's crack team, despite resources being depleted by events at Hyde Park & Maidenhead.

The field were sent on their way from race HQ at the Hub for a three lap test at 9.30am. David l'Anson was quickly into his stride and was still looking good at the end of your correspondent's second lap. The Good Gym Race team star continued and finished strongly to break the tape on 34:40 ahead of James Bewley (35:06) and James Hutchison (35:51).

There was a nice event buzz pre and post-race around the Hub HQ and a strong contingent of charity runners in their bright vests added to the colour of the event. A group from CALM (Campaign Against Living Miserably) were out in force and gave each other plenty of encouragement.

There was good backing around the course from family, friends, park users and an enthusiastic team of marshals, especially the lady on duty at the Outer Circle park entry – her vocal support and high fives were appreciated.

Sunday morning 10k summer fun in Regent's Park has come to end for 2019 but The Race Organiser will be back at this top London venue for the second leg of their Royal Parks Winter series on 8 December.