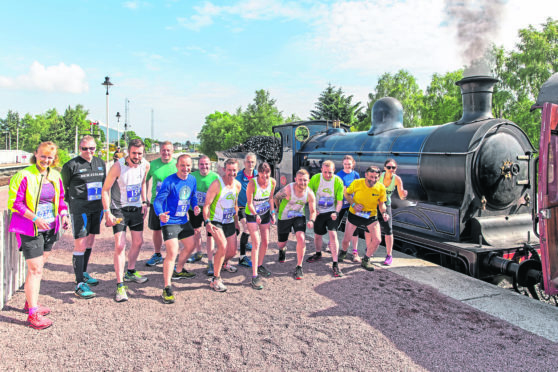 Do you have enough puff to beat the Strathspey steam train?

Disability Snowsport’s Race The Train, held in association with Cairngorm Runners, will be steaming back into Aviemore for a third year on Saturday (7 September).

It’ll be full steam ahead as runners race to the finish against the Strathspey Railway steam train, from Boat of Garten along the Speyside Way to Aviemore. Much of the 7.5km race, held within the Cairngorm National Park, runs by the railway track itself, giving runners the thrill of racing both two-legged competitors and a fairly impressive steam-powered challenger.

‘General Admission’ race entries are still available, and include a one-way journey on the 10.30am Strathspey steam train to the start line. Runners who prefer to make their own way to the start at the Boat of Garten Community Hall can do so, at a reduced rate.

Organisers point out that participants must be aged 15 or older to take part, and children are not permitted to run alongside runners. Dogs, even those on a lead, are also not allowed, as the route passes through the RSPB and SNH controlled areas.

While most of the 300-odd runners who took on the challenge of beating the train last year ran out of steam, two runners seemed to be made of steel.

With a time of 26.16, Inverness Harrier Stuart Gardener finished just under two minutes ahead of the train, which ground to a halt in Aviemore after its 28-minute journey. The second runner to pull into Aviemore station was his clubmate, Time Cooke, who finished just ten seconds ahead of his Strathspey steam competition.

Proceeds from Race the Train 2019 will benefit Disability Snowsport UK (DSUK), an Aviemore-based charity which enriches the lives of people with disability through snowsports.