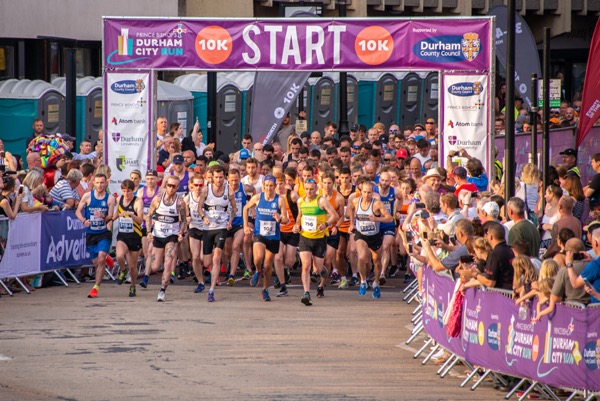 In soaring temperatures on what turned out to be the hottest day of the year so far, a field of close to 3000 runners tackled the 2019 Prince Bishops Durham City Run 10K and 5K races, completing challenging courses around the city centre, before finishing on Palace Green, in front of Durham Cathedral and Castle.

This was the first ever year of the Durham City Run Festival, which had expanded to take place across three separate days (Thursday 23 – Saturday 25 July) and included numerous running themed events for the duration.

The festival kicked off on Thursday with the 5K and 10K races and organisers had to be on the front foot quickly following a burst water main, which led to late changes to the routes and start times. As a result, both the 10K and 5K started together on Claypath. Organisers increased supplies of water along the course, and a team from County Durham and Darlington Fire and Rescue Service was on site with a ‘water curtain’ to cool down runners.

Marathon world record holder Paula Radcliffe ran the 5K with her daughter Isla, while Ben Smith, who ran 401 marathons in 401 days to support anti-bullying charities, ran the 10K, as did local runner Scott Baker, completing his 967th 10K on his way to running 1,000 in 1,000 days.

Meanwhile, North East marathon star Aly Dixon ran 15 miles from Sunderland to tackle the 10K as part of her preparation to represent Great Britain in the 50K World Championships on 1 September.

It was a close contest in the men’s field as Salford Harriers’ Grant Johnson claimed first in 33:38, narrowly ahead of 2018 winner Stephen Jackson (33:41) of Elvet Striders , with Jordan Bell of Blackhill Bounders third in 34:37. Emily Kearney of Wirral AC won the ladies’ race in 36:49, with Aly Dixon of Sunderland Strollers second in 38:26 and 2018 winner Tracy Millmore third in 39:21.

North East athletics legend and race director Steve Cram comments: “Once again, the Prince Bishops Durham City Runs have been excellent events. Both races sold out and the crowds came out in force to cheer on our runners. Circumstances beyond our control led to the late route alterations.

“I have to pay tribute to our race team and Durham County Council, who pulled out all of the stops to put on such a great event. We’re grateful for the understanding of our runners who adapted to the changes brilliantly and as always it was a fantastic sight to see them streaming across the finishing line in front of Durham Cathedral.”