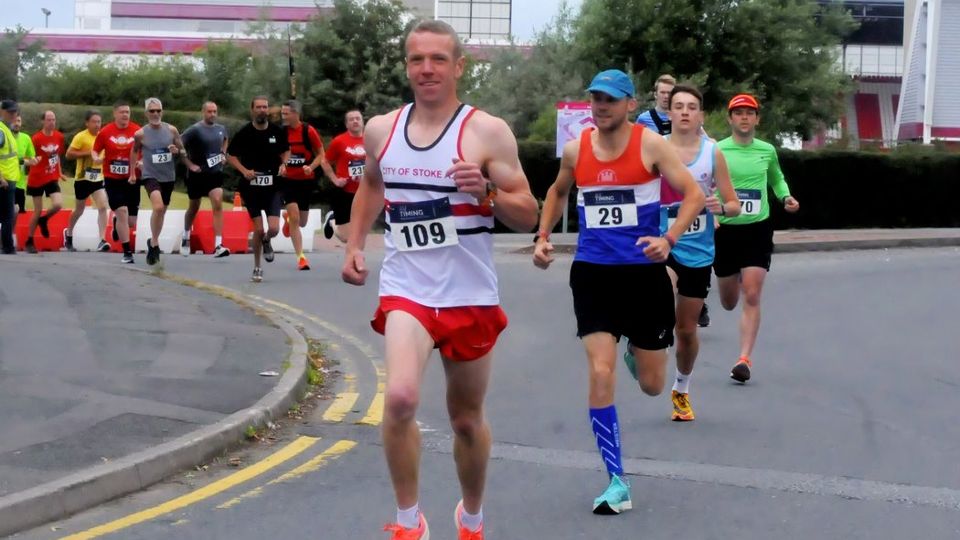 Sold out SOTFOR was a running success

Wins for Matt Eardley and Amanda Kelly in the 10K; Michael Harding and Eva Mion in the 5K.

There was a smooth landing on Sunday (3 July) for the Stoke on Trent Festival of Running (SOTFOR) 2022, that saw strong performances and a big hearted effort from fundraising fireman Spencer Smith. Well organised from start to finish, it flew back after a two year break to the delight of the North Staffordshire running community.

SOTFOR was, like many other races, affected by the pandemic that led to its postponement in 2020 with the 2021 event held as a virtual. However, it returned as a live event again in 2022 and runners of all ages enjoyed the support, camaraderie and distinctive red and blue finishers t-shirts.

The tireless work of Murray Grimes and Katherine Travers, visiting parkruns and races across the region to promote SOTFOR was rewarded with all the places being snapped up by 23 June. Entrants had the choice of 5K (one lap) or 10K (two laps) - or could sign up for both if they wanted a challenge with both on the same course from 2019. This included a particularly steep climb where a couple of official photographers waited at the top to capture the pain and suffering. A team from PB Pacers was there to help people to their target times.

The event took place at the Bet365 Stadium, the home of Stoke City FC beginning with the 10K at 9.30am followed by the 5K at 11.30am. UKA qualified coach and HPR founder John Danahay was the official starter (and also presented the prizes) for both the 5K and 10K and NSRRA Chairman Ken Rushton was Race Announcer.

City of Stoke AC’s Matt Eardley took the lead from the start of the 10K and stayed in control throughout the race. He was first across the line in front of the stadium in 35:41. Ben Bewley of Newcastle (Staffs) AC was second in 36:31 and Oliver Lymer third in 40:09.

Amanda Kelly of Stoke FIT stormed to victory in the women’s race, speeding over the line in 41:23. Carol Higgs of Trentham RC was second lady in 44:47 with Newcastle (Staffs) AC’s Martha Davis third in 47:21.

Then it was the turn of the 5K where youngsters as well as adults got the chance to show their running prowess. Amongst the participants was partially sighted Sonya Downs-Walker accompanied by a guide runner who received one of the loudest sets of cheers as she dug in up the final hill and on to the finish.

There was huge applause for fireman Spencer Smith who dressed in full kit for the 5K whilst carrying a 30kg dummy on his back to raise money for Stoke-on-Trent Foodbank.

It was another win for City of Stoke AC as Michael Harding raced to victory in 17:34. U18 Eva Mion was the female winner in 21:42.

All the results from both races can be found via the runABC Midlands Race Listings page.

The red/blue medal and t-shirt (red for the 10K and blue for the 5K) were gratefully received and praised by the finishers. These were accompanied by a bottle of water and goodies to refuel with.

Behind the scenes efforts, efficient marshals, excellent facilities and the collectable t-shirt ensured SOTFOR was a sure-fire bet to succeed.