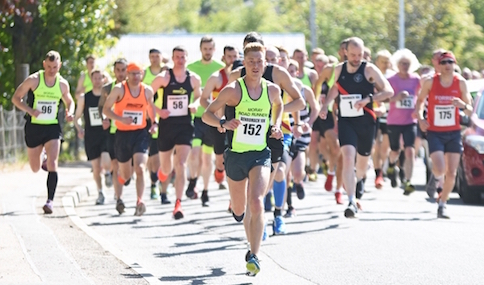 Gordon Lennox and Caroline Marwick both went into the fourth race of the series, Sunday’s Benromach 10K, as favourites for the series titles.

Although they missed the tops of their respective podiums at the final race, organised by Forres Harriers, both runners had built up enough of a lead over the previous three events to be crowned overall winners.

While Lennox won decisively, clocking a cumulative time of 2.15.07, he may well have liked more time to spare.

At just 47 seconds ahead of Lennox’s time for all four races in the series, Max Abernethy (Fraserburgh RC) proved himself a worthy challenger for the title to the very end, crossing the Benromach finish line for a cumulative time of 2.16.20. Six minutes behind Abernethy was Eoin Coull (Ross County AC), posting a series time of 2.22.21.

The competition for the women’s crown wasn’t as close. Marwick ran strongly throughout the series, posting two sub-40 minute times at both Benromach and Buckie, and just missing a third by nine seconds at Nairn. Her cumulative time of 2.39.32 was clear of that of Michelle Slater (Moray RR), who posted 2.45.04. Third in the women’s series was Slater’s clubmate Justine Blaszk (3.02.48).

Just under 50 runners took part in the all four races in the series – the others being Nairn 10K, Buckie 10K and tMoray RR 10K at Miltonduff – double the number last year. All were in the running for series prizes.

The Benromach 10K itself was won by Scotland international and Moray Road Runner Kenny Wilson (31.27).

Foreshadowing the tussle for the series prize, Lennox and Abernethy battled it out for the remaining Benromach podium places, too, with the Inverness Harrier finishing just three seconds ahead (34.16).