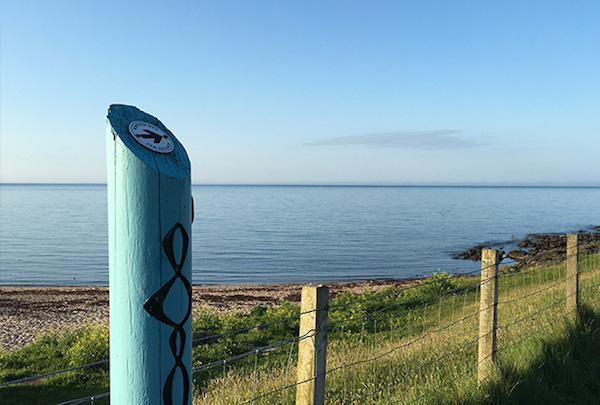 A hardy band of solo runners plus a big field in the team relay took on the Kintyre Way Ultra on Saturday.

One of Scotland’s most scenic long-distance paths, the recently extended Kintyre Way offers runners an almost ideal combination of varied terrain – from hill paths and forestry tracks to beaches and seaside rocks – combined with breathtaking scenery and views across the sea to Arran, Islay, Jura and Gigha.

Although the race itself has been on the go since 2007, 2019 was the first outing for a new route – and the beginning of a new path forward for the event. With the whole Kintyre Way extended to around 100 miles three years ago, the plan now is for the race to rotate through three sections – Tayinloan to Tarbert (the shortest section), Tayinloan to Campbeltown and Machrihanish to Campbeltown – in turn.

Fans of the solo ultra will thus cover the whole route of the Kintyre Way over three years.

This year’s runners all took on the most northern section of the Kintyre Way: 32 miles, south to north, beginning at Tayinloan and finishing in Tarbert. The relay runners took on smaller sections of the same route, in teams of two or three ­– Tayinloan – Clachan (9½ miles), Clachan – Skipness (12½ miles) and Skipness – Tarbert (10 miles).

This year’s changes weren’t the first for the event. In its original incarnation, both solo and relay runners took on the full 67 miles from Tarbert to Campbeltown. In time, a shorter, 35-mile option, from Tayinloan, was introduced – which proved so popular that the long option was dropped altogether.

The new route has so far been very well received, with runners calling the event ‘fantastic’, ‘amazing’ and ‘definitely recommended’. The marshalling, aid stations and check points along the route also came in for particular praise from runners, as did the views: ‘some of the most stunning scenery in Scotland’, which were ‘beautiful from start to finish’.

First home on the new route was Paul Monaghan (Greenock Glenpark Harriers) in a time of 4.21.54. Close behind him for second was Duncan Steen (Victoria Park Harriers and Tower Hamlets AC) in 4.23.39. First lady across the line was Elaine Somerville, in 5.21.59.