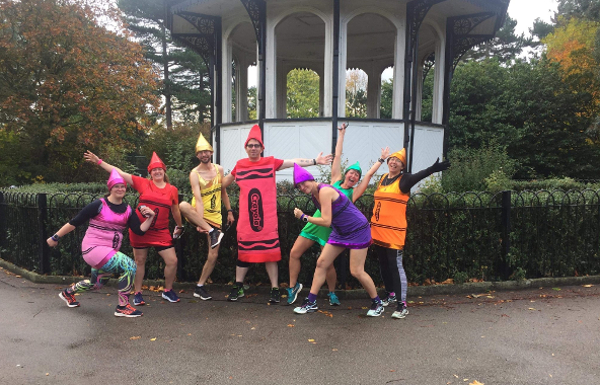 A group of runners from Northampton dressed as Crayola Crayons drew everyone’s attention at Bedford parkrun (Saturday 13 October). This was one of several stops for the colourful pack on their UK parkrun tour.

The group of seven from Northampton parkrun were a feast for the eyes, wearing a spectrum of colours that brightened up a cloudy Saturday morning in Bedford. The group connected through parkrun and while they differ in terms of running ability they have blended together to become a friendly, supportive unit. Costume is a major factor as ‘Mrs Purple’ or Michelle Lewis, run director at Northampton parkrun, confirmed: “We like running for fun and for us, fun now includes going to different parkruns and also dressing up."

There is a serious side to the group who take part in numerous fundraising events including Race for Life, Rowan’s Reality, MNDA, Diabetes UK, Cavernoma Alliance UK and Cancer Research UK. Wearing costumes is a form of light relief.

Catherine Hickford AKA ‘Mrs Orange’ is a keen Crayon and particpant at Northampton parkrun. And since May 2017, has lost seven stone as a result of training and mentoring from Michelle Lewis. Their hard work and dedication have been recognised via the Northampton Leisure Trust Sports Awards where Catherine Hickford won the Get Active Award 2018 while Michelle Lewis was runner-up for the Volunteer of the Year Award.

Four of the Crayons will be visiting Market Harborough parkrun on 3 November.