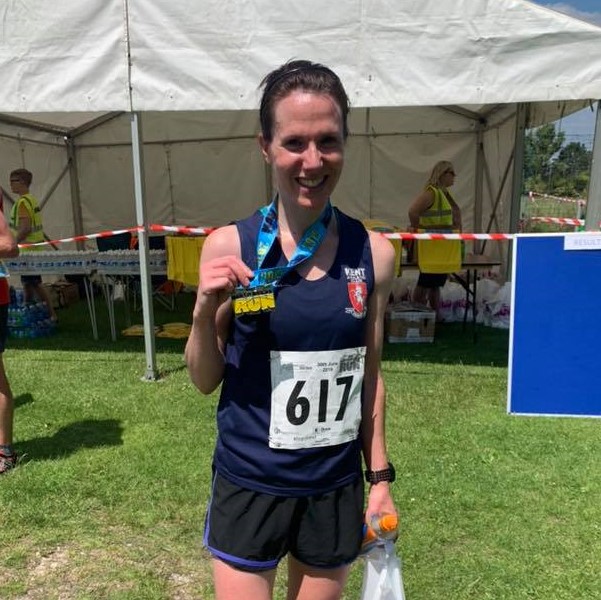 Five on the trot for Clements at 30K

The 551 finishers at the 36th North Downs 30K breathed a collective sigh of relief as the torrid temperatures of 24 hours earlier had eased somewhat for the start of the race yesterday (Sunday 30 June). Conditions were still challenging, with temperatures reaching 25C, and Ed Bovingdon of the host club Istead & Ifield Harriers was the sole finisher inside three hours.

Richard McDowell's 2018 course record of 1:52:40 was never under serious threat on another warm day but the overnight drop of almost 10 degrees and a freshening breeze was welcomed by runners and race officials as the popular North Downs 30K hosted the British Masters Multi-Terrain Championships for the fourth time.

Taking her fifth consecutive overall win in the race from Cascades Leisure Centre, Gravesend was W35 Amy Clements (Kent AC, 2:14:33) having made her debut with second place in 2014. Clements was followed by Christine Howard (Billericay Striders, 2:31:03) and Harriet Woolley (Tonbridge, 2:31:20), who had enjoyed a close tussle for the remaining podium places.

The race route follows tracks, trails and quiet lanes through some of the finest scenery in Southern England and features the relentless climb to Holly Hill at almost 200 metres above sea level and some fabulous views across the North Downs.

Typical of the many compliments on social media was this post from first-timer Deborah Parris: “Such a brilliant event; well organised with lovely supportive marshals, great water stations (Prosecco at halfway was a welcome surprise) lovely scenery, great cakes at the finish and lovely entertainment and a fabulous goody bag and T-shirt. This was my first time running this race and I’d say it’s my favourite ever. I’ll be back next year for sure!”