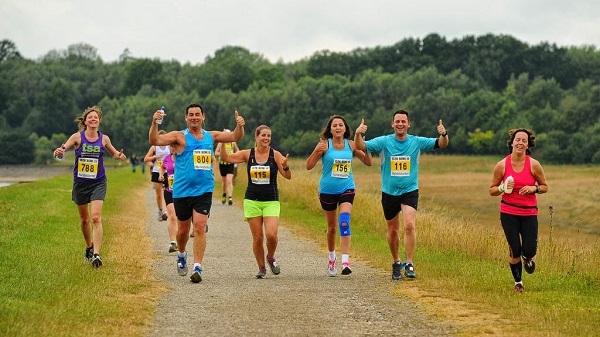 Bewl 15 may be one of the shortest race titles in the runABC South race listings but the brevity of the name hides the true character of the event that was once voted the sixth best race in the UK. The 20th consecutive race will be held on Sunday 7 July – with a few numbers still available.

Bewl Water is a reservoir in the River Bewl valley, straddling the boundary between Kent and Sussex, set in an Area of Outstanding Natural Beauty in the heart of the High Weald. The reservoir can hold 31,000 million litres of water, enough for nearly 200 million people. It is the largest stretch of open water in the South East. The Round Water Route forms the basis of the course for this magnificent example of the trail running genre.

Race management is in the capable hands of Sussex-based Nice Work and the event has been organised by Wadhurst Runners since its inception in 2000. The combination of local club knowledge and professional management works perfectly to produce a slick event.

Finish line attractions include cake, biscuits and hot drinks plus the obligatory medal, technical T-shirt and goody bag. You can even enjoy a post-race massage while listening to the Wadhurst Brass Band belting out traditional and more unexpected modern numbers.

For a real feel of the action runABC South recommends this excellent review by athletics vlogger Stephen Cousins of Film My Run made after the 2016 Bewl 15 or you can jump straight to the action via YouTube here.