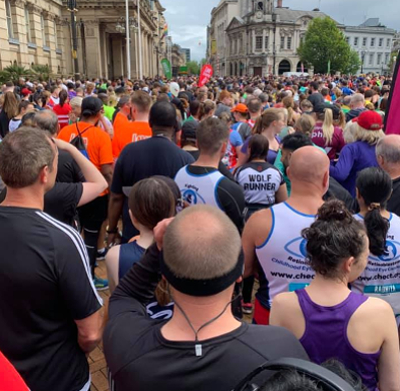 Over 7,000 runners put their best foot forward at the Simplyhealth Great Birmingham 10K (Sunday 26 May) as they road tested the new course.

Part of the Great Run series, organisers changed the course for this year’s race that took runners through the centre of Birmingham, passing landmarks that included The Bullring, Rotunda, the Cathedral and the Science Museum.

Olympian Jo Pavey was amongst the field as were a team from Birmingham Women’s and Children’s Hospitals and many others running on behalf of a loved one or charity. There were two start lines on Colmore Row, either side of the junction with Bennetts Hill and these together with the big city finish at Aston University were popular with racers.

Aside from the start and finish they faced a hillier course than last year that featured a section on the main road to and from Perry Barr. The field completed this via underpasses and the disco tunnel at 9K where they experienced a wall of sound and flashing lights.

Douglas Musson of Notts AC was the winner in 30:22. Chloe Richardson of Birchfield Harriers was the first female in 34:56. Jo Pavey crossed the line in 36:50 despite nursing an Achilles injury and was third placed woman.

There were cheers and a round of applause for the final two finishers, Kerri Mudie and Natalie Niblett who ran for Birmingham Children’s Hospital. The achievement was particularly sweet for Natalie who four months previously, had been unable to walk due to meningitis. She came back from serious illness to cross the line with Kerry in 2:07:18.

The new course received mixed reviews but there was praise for the volunteers, marshals, supporters and, the disco tunnel!