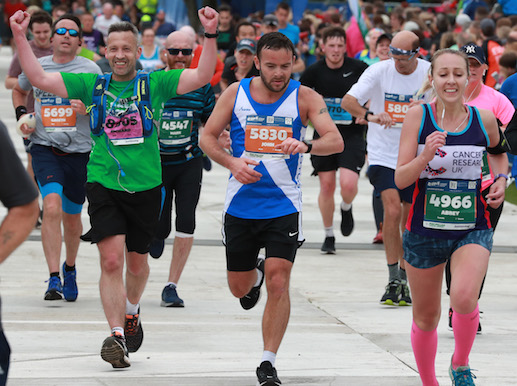 Running for a reason raises millions at EMF 2019

When a world-class event like Edinburgh Marathon Festival takes place on our doorstep, it’s natural to focus on the winners and their incredible achievements. But it’s just as important to remember what the thousands of other runners who finished behind them achieved too.

On Sunday, Claire Dalrymple from Edinburgh crossed the Edinburgh Marathon finish line for the 17th time. This year was particularly poignant for her, as she ran in memory of her husband Stephen for the event’s official charity, Macmillan Cancer Support. Stephen passed away in February after losing his battle against oesophageal cancer.

Claire explained: "Throughout Stephen's illness I kept running to keep me strong and focused, it really was my therapy. I've been raising money to say thank you to Macmillan for all their help and support."

Some runners made a lengthy physical, as well as emotional, journey to the start line. 14 runners from El Salvador travelled to Edinburgh to take part in the weekend’s marathon, half marathon & 10K events. They ran in tribute to one of their group, Maria Olimpia Escobar de Melhado.

Maria was stabbed on an early morning training run whilst preparing for the event, and tragically passed away on Saturday, 18 May.

Oscar Edgardo Melhado, Maria's brother-in-law said: "These are the risks that our runners take, in our country plagued with crime, to keep our passion for running. We are not giving up, Maria Olimpia taught us that love and passion transform ugly realities.

"Our beloved Maria Olimpia started running 10 years ago and was very enthusiastic. She created at least two runners' groups mainly of ladies. She encouraged many of her friends to register and organised the trip."

For others, running just one of EMF’s races wasn’t enough. Jeremy Hill from Edinburgh completed a 'hairy': the collective name used to describe the grand slam of running a marathon, half marathon, 10k and 5k. Jeremy ran for the MS Society and the MS Therapy Centre Lothian in support of his wife who has the condition.

At the finish line, a tired Jeremy said: "I was so glad to be finished. I almost didn't make it from the half marathon finish!”

Three-year-old Anne Murphy completed the Kids' Kilometre with dad Tom and officially started the race alongside mum Cheryl. The family took part in memory of daughter and sister Edie who died after a short and sudden illness in October 2015 aged only two. Cheryl said: "Running helped us so much after Edie died and continues to."

Their involvement in the Edinburgh Marathon Festival forms part of a wide range of fundraising activities Cheryl and Tom have undertaken over the years to raise an incredible £25,000 for Edinburgh Children's Hospital Charity and they hope to surpass the £30,000 mark this year.

When all is said and done, runners who took part over the weekend hope to have raised more than £5 million for charities and other worthy causes.

"We are so proud to host a truly world class running event in Scotland's capital for runners of all ages from across the globe. Congratulations to everyone who took part.”

Early bird entries are now open until Sunday, 9 June for EMF 2020 (Saturday 23rd and Sunday 24 May) at the event website.