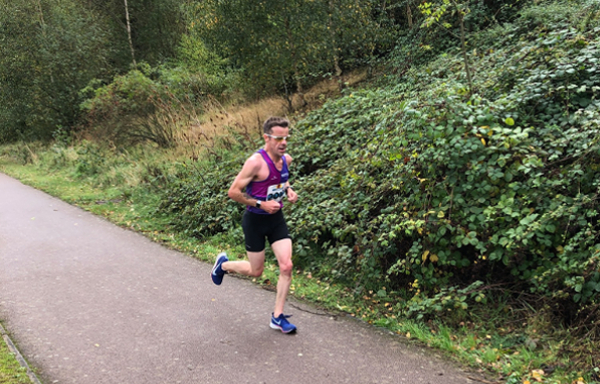 Aldridge is king of the road at Northampton Half Marathon

Michael Aldridge was in the driving seat at Sunday’s (29 September) Northampton Half Marathon, winning the race by a substantial margin. The Wootton Road Runner put his foot down from the outset.

Over 800 runners lined up for the Go Beyond Sport Northampton Half Marathon sponsored by Wollaston BMW. There was a strong start by Michael Aldridge who led the field around the historic town centre before heading back towards the Guildhall. They headed out of the town and into the countryside before finishing in Delapre Country Park with the imposing abbey in the background.

Aldridge of Wootton Road Runners was first across the line in 1:11:23 with a gap of over 6 minutes between him and Ali Herbert of Cherwell Runners & Joggers who came second in 1:17:25. Alistair McDonnell of Rugby & Northampton AC was third in 1:19:57.

Amongst the finishers was Trudi Knight who set a new World Record (WR) for running the half marathon on crutches. She crossed the line in 2:33:51 - beating the current female WR of 3:30:00.

Around 80 runners took part in the first SATRA Technology Northampton Size 6 that paid homage to the town’s shoemaking tradition. Julian Blackwell of Wellingborough & District AC was the winner in 43:05; Claire Holland of Parklands Jog & Run was the women’s winner in 50:37.

The new finisher’s village was a vote winner as were Wellingborough Community Gospel Choir who provided musical accompaniment for runners at the end of the race.