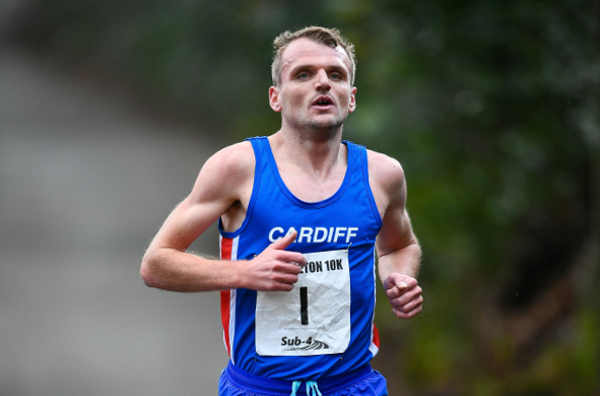 On Saturday 24 November, Matt Clowes attempted to beat the Cheddleton 10K course record of 30:42, set by Clifton Bradeley in 1987 and made a superhuman effort to lower the long standing mark.

Clowes of Cardiff AAC is Cheddleton born and bred and returned to his roots to try and break the 31-year old record on a tough, hilly course in the Staffordshire Moorlands. He knew it would be a daunting challenge due to the nature of the course and the fact the time was set by a former international athlete and a sub-4 minute miler! Not an easy task indeed.

At 2pm on a dry, chilly afternoon in Cheddleton, over 220 runners with Matt Clowes at the front waited to start. Matt shot off like a rocket, giving it 100% as he completed three laps on country lanes while Clifton and others willed him on every step of the way. He almost made it, winning the Cheddleton 10K Christmas Pudding Race in 30:51 – only 9 seconds off the record.


There were impressive times by the second and third placed runners: Alastair Campbell of Buxton AC finished in 33:35 and 2018 NSRRA Champion Carl Moulton of Boalloy in 34:07.

There were prizes for the first 20 runners which included women and veterans and a Christmas pudding for every finisher. A substantial amount of money was raised for Cancer Research UK.

Matt plans to return saying: “That record is a tough one but I will definitely come back next year for another crack.”