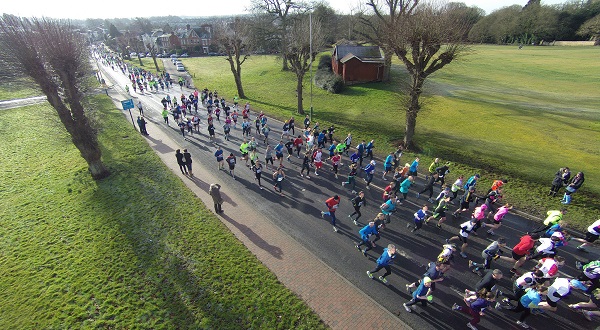 Entries are flying in for Tunbridge Wells Half Marathon

Entries are literally flying in for the 36th Hendy Tunbridge Wells Half Marathon on Sunday 17 February 2019. There may be an increased entry limit of 2,500 to cope with demand but race organisers Tunbridge Wells Harriers are advising runners to sign up early to avoid disappointment.

One of Kent's most scenic races, Hendy Tunbridge Wells Half Marathon has won a several awards including 'Most Improved Race in the UK' and was also voted the second best half marathon in UK by Runners World magazine readers.

Last year's race was featured in runABC South news by Kent-based reporter Alan Newman. The winner on that occasion was Simon Goldsworthy and the Guildford & Godalming athlete has recently returned after a successful trip to the BMW Berlin Marathon, where he set a superb PB (2:28:11) in 78th place.

Simon has already agreed to defend his title at Tunbridge Wells next year and the defending women's champion, Maria Heslop (Tonbridge), is another likely entrant as she always enjoys her local races.

The first 300 places have already been snapped up thanks to an early bird offer of £24 (£26 non affiliated) available until mid-December. Online entries close at midday on 13 February 2019 and the entry limit has been reached in previous years.

Tunbridge Wells Half Marathon is organised by runners for runners and welcomes main sponsor Hendy again for next year. Despite the forbidding 300 feet ascent of Spring Hill around mile seven the course has PB potential due to its fast first half and downhill final mile.

Race entries include meticulous organisation by volunteers from Tunbridge Wells Harriers, quality medal, free technical T-shirt and legendary friendly marshals. In the past six years the race has donated more than £150,000 to charity and worthy local causes. The lead charities for 2019 are Tunbridge Wells Counselling Centre, The Bridge Trust and The Pickering Centre.