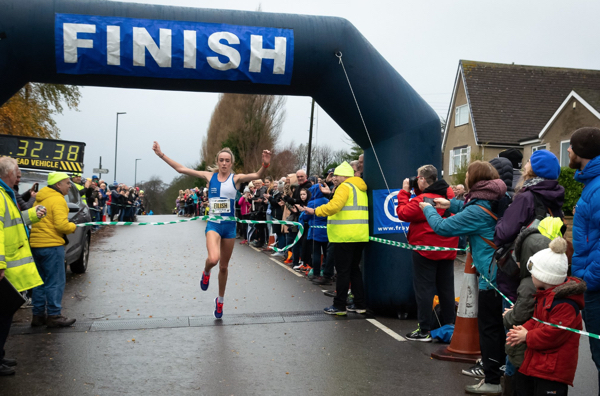 South Yorkshire’s most popular 10k just seems to be getting faster with Jack Martin setting a course record and Eilish McColgan once again excelling as she defended her title on Sunday (2 December). The race saw another incredible turnout with close to 3000 competing at the Steel City Striders’ organised event.

Staged since 1993, the Percy Pud 10K has seen its status steadily rise and is now a regular sell-out. As anticipated, the race got off to a ferocious start with some of the country’s big names – Andrew Heyes, Ben Fish, Martin and McColgan – all seeking an early lead.

It was Stockport’s Martin, second at last month’s Abbey Dash, who proved to be the strongest, crossing the line in an impressive 29:13, slashing 29 seconds off the previous course record and preventing Heyes (29:31) from defending his crown. James Straw of Lincoln Wellington bagged third in 31:11.

Eilish McColgan, meanwhile, continued her excellent late season form, securing what was her third notable victory in six weeks with previous wins at Wilmslow and the Great South Run. Her time of 32:39 was just outside her own course record of 32:23 but was enough to ensure she enjoyed success for the third consecutive year at Sheffield.

Taking 9th overall, McColgan’s closest competitors were Natasha Hatswell in 35:49 and Rachel Friend (36:29). Reflecting on her year, McColgan said: “2018 is a wrap! Finishing off the year with a win at the Percy Pud 10K. Little sluggish starting but finished strong especially with the final 2 mile uphill. Now it’s time to work – 9 weeks of training here we go!”