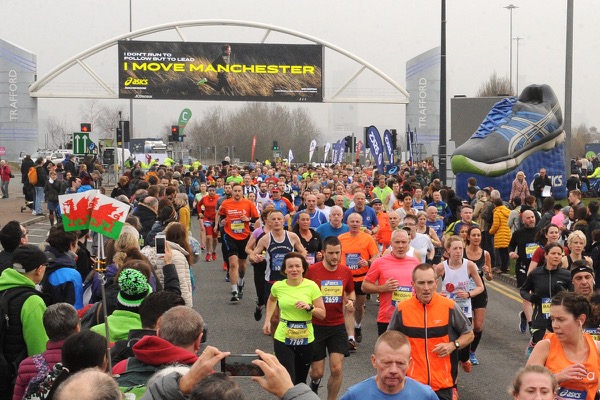 Close to 10,000 runners, a new course record and a female champion who sliced ten minutes off her PB all made for a remarkable day of racing at Sunday’s ASICS Greater Manchester Marathon. The race, re-established in 2012 after a 10 year absence, is now seen as one of the country’s top marathons, a sentiment echoed by event CEO, Nick Rusling, who commented: “What we have seen here today is a truly-world class mass participation event with fitness and inspirational human achievement at its very heart."

The race, re-established in 2012 after a 10 year absence, is now seen as one of the country’s top marathons, a sentiment echoed by event CEO, Nick Rusling, who commented: “What we have seen here today is a truly-world class mass participation event with fitness and inspirational human achievement at its very heart."

White, whose previous PB came in London last year (2:42:37) put in an excellent performance to claim second in 2:41:16. She has now set marathon PBs for three consecutive years, suggesting that the only way is up for the Garscube runner.

White was unfortunate to come up against Dani Nimmock, who sliced an incredible 10 minutes off her PB to take first in 2:38:24, Wakefield’s Julie Briscoe claimed third in 2:41:36.

Kenya’s Shadrack Tanui lived up to his billing of pre-race favourite to secure first in 2:21:19. The 31-year-old Kenyan, who boasts a PB of 2:10:39 from Seville Marathon, pulled away at the half way point and never looked in trouble thereafter: Southport’s Ben Johnson (2:25:04) and Rathfarnham’s Mark Ryan (2:25:04) were his closest competitors.

Just as Sunday was filled with PBs across the board, there were numerous inspirational tales from the 9,500 strong runners. One of those taking part was Claire Lomas, who joined competitors at the start line and is aiming to cover the 26.2 miles wearing a bionic suit.

Another Scot enjoying a successful trip to Manchester was popular blogger Mark Gallagher. Mark, who admitted to big pre-race nerves, nailed a 12 minute PB to finish in 3 hours 11 minutes despite a bout of cramp.

Sean Aintree, leader of Trafford Council, summed up the upbeat feeling that was felt throughout the day: "It is a great showcase of the true spirit of people here who have shown a world-class welcome so many local and international participants. I offer my congratulations to all who took part, from elite athletes to the many who successfully raised so much money for charity."