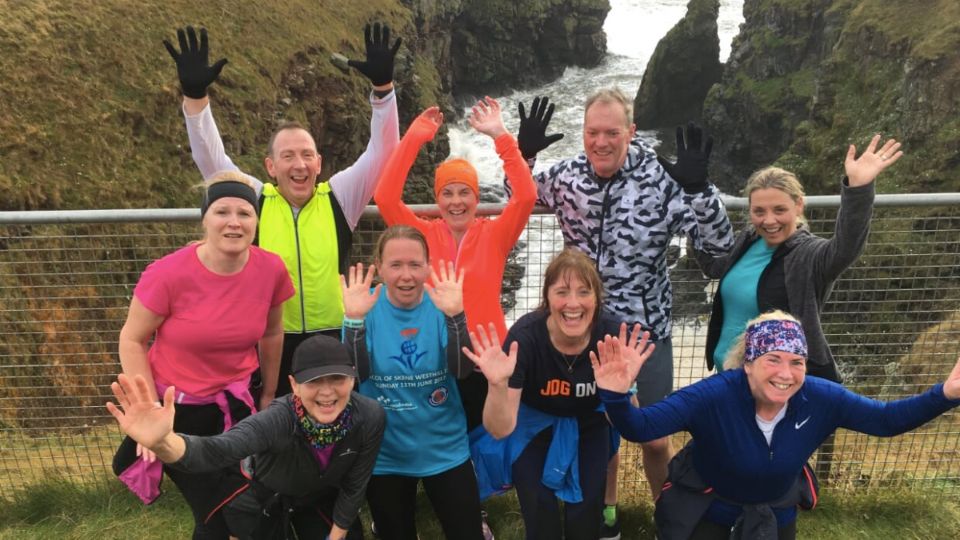 Aberdeen Endurance Joggers: the new JS group in it for the long haul

Conceived after lockdown as a way to allow friends training together to continue running as a group, Aberdeen Endurance Joggers aims to bring together jogscotland runners from all over the City & Shire for weekend outings a bit longer than what their home groups offer.

The group’s founder, Raymond Davidson, tells runABC Scotland online: “When the new rules about training only in ones and twos came in, it caused real problems for people who ran in their own groups. I could also see that the new rules were leading to a drop in people’s motivation. So, I had a chat with a few of the friends I was training with to see how we could all keep running together and still stay within the rules.”

During their discussions Davidson and his friends also spotted what they saw as a gap in the market: no place for Aberdeen’s jogscotland runners already able to run 4 or 5 miles continuously to take their mileage up a bit – or run regularly at weekends – while still staying within what he calls ‘the jogscotland family’.

Two months after their first run, Davidson says the new group is going ‘really well’, with around 40 runners joining them regularly and about 80 registered on Wix, the app they use to book places. They are also able to draw from a pool of 20 jogleaders, something no single group in Aberdeen can do.

Davidson is very clear that Aberdeen Endurance Joggers has its own identity, and isn’t out to compete with existing jogscotland groups: it’s all about bringing the members, leaders and strengths of the individual clubs together.

As Davidson says, “Most jogscotland members wouldn’t normally run with other jogscotland groups. We’d see them at races and give them a nod, but that’s not happening now. But in the last few weeks, members of jogscotland groups in Portlethen, Westhill, Rosemount, Bridge of Don, Hazlehead and Torry have all run with us.”

On any given weekend, Aberdeen Endurance Joggers offers its members several runs of different distances and paces in several different locations.

As Davidson explains, “It’s up to our leaders to decide and announce the time, meet point, pace and distance for the run. Recently we had three different runs on Sunday alone: 5 miles at Seaton Park, 8 miles at Westhill and 10 miles at Hazlehead.”

With no races on the horizon at the moment, the longest run currently offered tops out at about 10 miles, but Davidson expects that will change when and if marathons and half marathons appear again.

Regardless of distance, all runs are taken at an ‘easy pace’, with a ratio of 12 runners to one coach, and with regular regrouping to suit the slower runners. “There’s no pressure to chase after the leader,” Davidson says.

Davidson’s plan is for the group to grow organically, but ‘not too fast’. In time, he’d like to offer speed work on a track or hill reps in addition to the weekend runs, but is equally determined that the group should ‘walk before we can run’.

Over time, Davidson, CIRF level 2 qualified himself, also hopes to expand the number of coaches available to his runners, to help those who want to improve and work on training plans. He’d particularly like some of those future coaches to come up through the group’s own ranks.

But there’s no doubt he’s delighted with the success of Aberdeen Endurance Joggers so far: “It’s great to see people posting right after one session that they’re already looking forward to the next.”