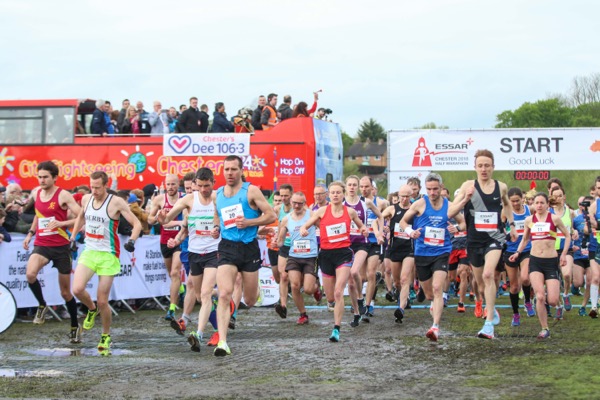 Chester ready as it closes in on 40

Still aglow from their success at the recent National Running Awards, Active Leisure are expecting over 6,000 runners to take part in the 38th Essar Chester Half Marathon on Sunday (19 May).

Chester Half is one of the UK’s longest established and most highly regarded half marathons, starting and finishing in the historic Roman/Medieval city of Chester. The fast and largely flat city and rural race route will be run entirely on closed roads.

“This coming Sunday will see us showing off the best that Chester has to offer,” says Chris Hulse, joint organiser of the event, “with runners coming from far and wide to participate in our race, joining an impressive local contingent.”

Heading up the field will be leading runners including Julie Briscoe, Gemma Connolly and Kirsty Longley. Wakefield Harriers’ Briscoe has recorded two quick times over 13.1 mile so far this year (at Barcelona and Wilmslow, 1:16:11 and 1:17:01 respectively), while Connolly (SB of 1:19:31) and Longley (1:18:08) are not far behind.

Indeed, given the right conditions, Amanda Cook’s 2013 time of 1:14:32, could well be within the touching distance if the top three are able to push each other to the last.

The men’s field will see two athletes who are no strangers to racing in Chester. Mohammed Abu-Rezeq, winner of last week’s Asda Foundation Leeds Half Marathon, will likely face stiff competition from Ben Fish of Blackburn Harriers & AC. Vincent Bolt’s course record of 1:02:21 might be a bit of a push, but there will be no shortage of excitement at the front come Sunday.

runABC North will be keeping a close eye on proceedings with a race report in the pipeline for early next week.