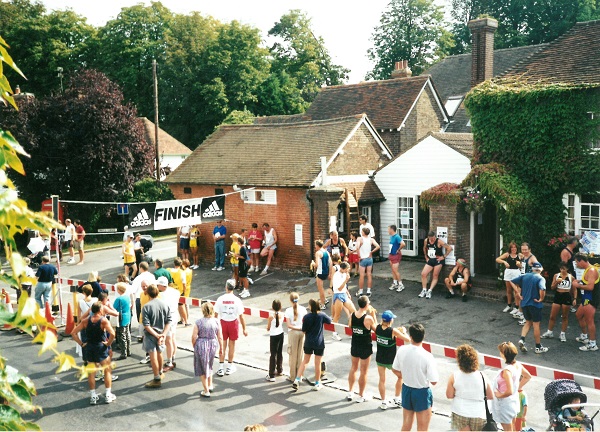 Point to point for a pint at Kings Head

If you are looking for something different for Summer Bank Holiday Monday (26 August) we suggest the Kings Head Canter 5K be given some consideration. This retro feeling race has been run on the same point to point course for 22 years (see photo of the inaugural finish).

The logistics of this race can involve non-running supporters as competitors choose to park at the finish and warm up for two miles across the fields to the start or park at the start and warm down to collect their wheels. However, the best plan is to have a designated driver as all finishers enjoy a free pint of the 1648 Brewing Company’s ale in exchange for a race number!

Last year's winners were James Westlake (Crawley AC, 15:16) and W45 Tara Shanahan (Arena 80, 18:24) as Finn McNally's course record was put under pressure in good conditions. Kings Head Canter has often been blessed with fine weather but the 2014 and 2015 races were both held in a deluge. Fingers crossed then for the 2019 edition, which is being held as part of the Harvey Curtis Sussex Road Race Challenge.

Other attractions, apart from the free beer, include the BBQ on the green, Jog Shop Brighton vouchers and unique Kings Head Canter trophies for the first three men, women and age-graded overall – a Kings Head tradition since 1998 using original 1998 Racemaster tables. The race commentary from long serving race director, Stuart Mills, will keep you entertained and photos from Jimmy the Snaps will remind you of a great day out in rural Sussex.

Entries are open now and the race often reaches capacity. Proceeds from the race, which is organised by East Hoathly and Halland Carnival Society, go towards the spectacular annual carnival held in November each year.