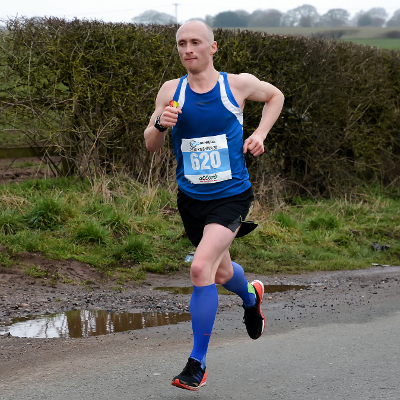 Tom Charles took the crown in ideal race conditions at the Velo Runner Knighton 20 on Sunday (11 March). He was in imperious form, finishing nearly 10 minutes ahead of the runner-up.

Charles of Trafford AC was first across the line in 1:49:04. Daniel Soltys of Stone Master Marathoners was second in 1:58:51 and the first North Staffs Road Runners Association (NSRRA) finisher. A contrast in race times between second and third places with only seven seconds between Soltys and James Hickinbottom of Shrewsbury AC who finished in 1:58:58.

There was a closer gap between the top two women with Rachel Olivant of Derby AC winning in 2:14:27 followed by Jennifer Rich of Steel City Striders in 2:14:42. Stone Master Marathoners had another podium finish thanks to Joanne Bentley who was third in 2:21:23.

Les Tams of South Cheshire Harriers was the midpoint runner in 2:54:42. A full set of results can be found on runABC Midlands race listings page.

Formerly the Stafford 20, the Velo Runner Knighton 20 is the third race in the NSRRA programme of events and was organised by Ken Rushton and his team who are also responsible for the Alsager 5.

Everyone gathered at Knighton Sports and Social Club ready for the 10.30am start before heading off in a clockwise direction around country lanes, refuelling at the drinks station at the end of each lap. Runners completed three hilly laps around Knighton although there was a relay option for anyone who preferred a shorter distance. There were prizes for the first, second and third man and woman with technical T-shirts for all finishers.