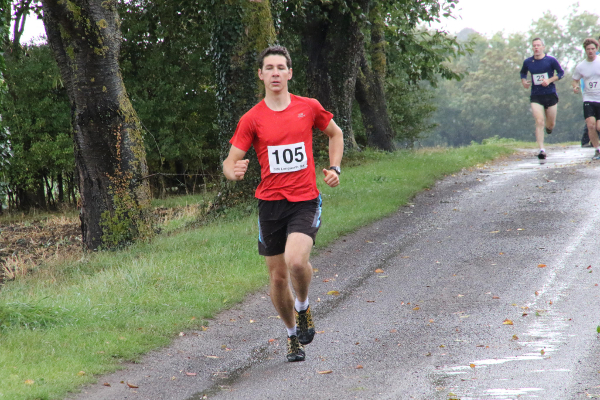 Storm Ali threatened to stop proceedings at Sunday’s (23 September) Longworth 10K in Oxfordshire but at the end of the day the challenging conditions proved no match for race winner Jonty de la Harpe.

Jonty has consistently performed to a high standard at Abingdon parkrun and Sunday’s display was equally as impressive. The U23 athlete won the 2018 Longworth 10K in 37:28, nearly two and a half minutes ahead of Elliot Birkbeck who was second in 39:46. Craig Lewis took third place in 40:27.

Nearly 100 runners defied the Met Office forecast, setting off at 11am from Longworth Village Hall to follow a scenic, multi-terrain course through the Oxfordshire countryside. They began at the east end of the village before heading north to the river where they followed the Thames Path National Trail in a westerly direction. They continued to Shifford Lock, climbed up to Hinton and onto a bridle path to finish in front of the Grade II listed Longworth Manor.

This is an annual event organised each year by Longworth Runners since 1998 to raise funds for the Hinton and Longworth Education Fund. The first race was held in 1998 and since then it has become a popular fixture, attracting runners from all parts of the UK and overseas.

It is also known as a friendly, inclusive event with a technical T-shirt for every finisher and good food courtesy of the award-winning Blue Boar pub.