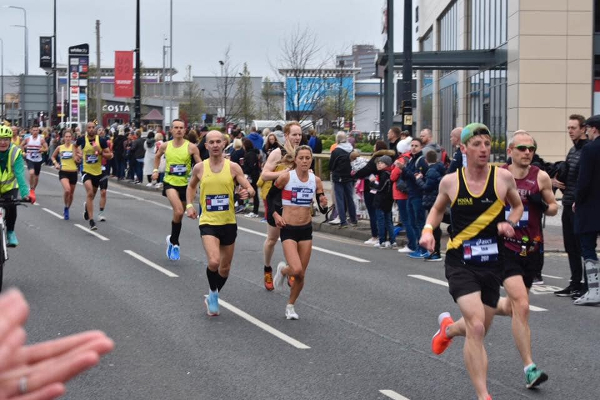 An outstanding display of running by Jenny Spinks saw her win the women’s race at the ASICS Manchester Marathon yesterday (Sunday 07 April) by a substantial margin as 14,000 runners 'went ‘mad for it’ .

Elite international distance runner and member of Bristol & West AC, Jenny Spinks showed her class as she ran strongly throughout to become the first female in 2:35:19. Spinks also finished more than four minutes ahead of Fanni Gyurko of Central AC who was second in 2:39:50. Johanna O’Regan of St Neots Riverside Runners took third place in 2:42:15.

Aaron Richmond of Bideford AAC was the overall winner in 2:21:34; with a gap of nearly four and half minutes between him and Gareth Raven of Sale Harriers Manchester who finished in 2:26:07. Jo Corbett was close behind to finish third in 2:26:12.

Runners travelled from across the UK and overseas to take part in the ASICS Manchester Marathon and on a fast, flat route lined with thousands of cheering crowds. Spectators applauded everyone’s efforts and handed out jelly babies and orange wedges along with high fives and together with bands made for a festival atmosphere.

There were a number of homemade signs along the route that caused more than a few laughs from runners. The Star Wars inspired ‘May The Course Be With You’ was popular as were a few others but the clear winner was ‘Whoever Finishes Last Has To Sort Out Brexit’.

Next year’s race has a new city centre section which passes several landmarks including the Opera House and Spinningfields. Pre-register via the ASICS Manchester Marathon website.