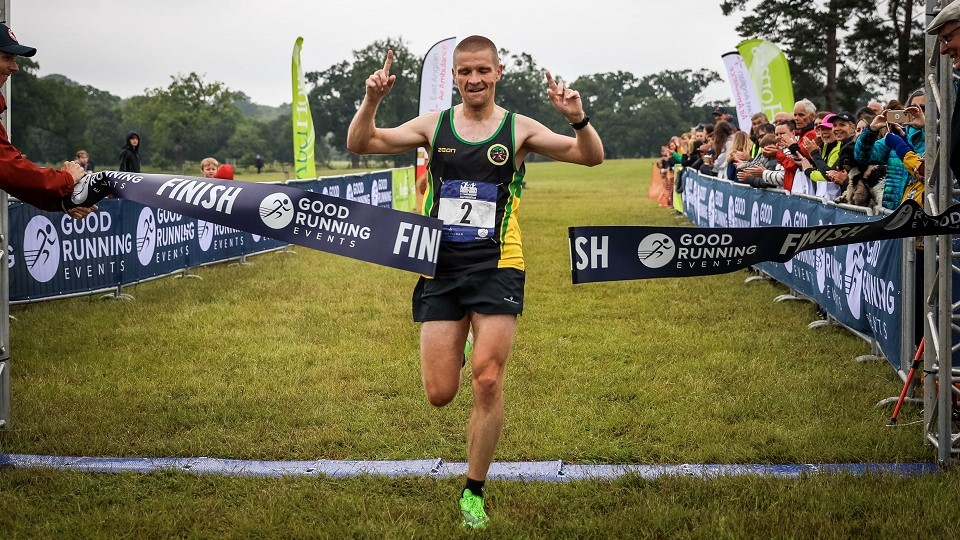 Good Running Events lived up to the promise of their company name with an immaculate first promotion of Run Sandringham Running Festival on a soggy Sunday in Norfolk, complete with Royal patronage!

The private home of four generations of British monarchs since 1862, Sandringham Estate is a much-loved country retreat of Her Majesty The Queen, and large-scale public events within the 20,000-acre grounds are a rare privilege.

The weather on Sunday (20 June) could have been better but the unexpected appearance of an enthusiastic Prince William and his children George (7) and Charlotte (6) gave the events the royal seal of approval, to the cheers of the surprised and delighted runners. The start was announced by Prince George and Princess Charlotte on the public address as they excitedly counted down with Prince William from 10 and then shouted: “Go”!

There were three events to select from. The half marathon had 902 finishers in 4:14:44 and was won by David Hudson (pictured above) of Huntingdonshire AC in 1:08:48 – a more than respectable return on the serpentine course through stunning parkland and a personal best by 41 seconds. Thomas Joly de Lotbiniere (British Triathlon, 1:12:55) and M40 Neil Pollard (Newmarket Joggers, 1:13:22) were the runners-up.

The programme was completed with a well attended Community Mile and there were 1,400 competitors in action across the three events, with significant sums being raised for the three designated race charities: East Anglian Air Ambulance, East Anglian Children's Hospices and Break, plus runners' personal causes.

After pausing briefly for breath the thrilled Race Director, Aaron Murrell reflected on the success of the event: “We were really pleased to see so many people join us for our inaugural event here. We were really happy that HRH The Duke of Cambridge joined us as our Official Race Starter – along with his children George and Charlotte. Our special thanks also to our amazing team of staff and volunteers, without whom the event would not have been possible”.

Good Running Events will be back at Sandringham Estate on Sunday 26 September '21 for Run Sandringham 10K for which there are limited entries still available and the Run Sandringham Half Marathon, 5K and Community Mile Running Festival will return on Sunday 19 June 2022.