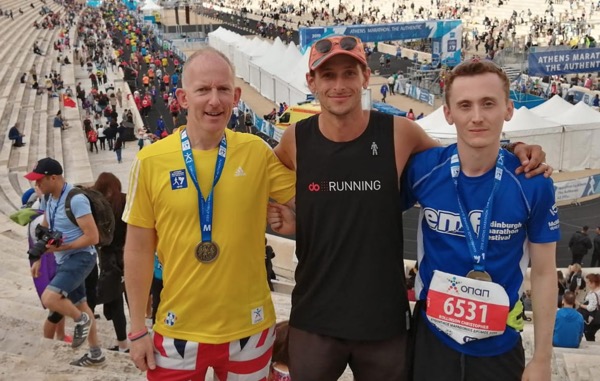 Lucas Meagor, event director of Hull Marathon and Humber Bridge Half Marathon, has joined Nick Butter in his monumental effort of completing his 196th marathon in Athens on Sunday (10 November).

Athens Marathon was the culmination of Nick’s pursuit to become the first person to run a marathon in very nation of the world – 196 by the qualifying criteria used.

His pursuit, throughout which he has been raising money for Prostate Cancer UK, has taken 675 days over seven continents and seen him run 5130 miles. So far, Nick has already raised over £65,000 – you can view his Justgiving page here.

Race director Lucas, who joined Nick in Uzbekistan and Azerbaijan in April for two of his marathons, was by his side as he completed number 196. On how the partnership came about, Lucas said: “I met Nick in January at the National Running Show and his story struck me straight away as an adventure I’d love.”

On Sunday, taking on the original route from the town of Marathon to the Panathenaic Stadium (where the first modern Olympics took place in 1896), he achieved the remarkable feat.

You can learn more about Nick’s 675 day trip on 26 September 2020 when Nick is scheduled to be one of the guests at the Hull Marathon Fitness & Health Show at the Bonus Arena. Nick then hopes to run Hull Marathon powered by Eon Visual Media & Brainworks the following day.

You can join him by entering here.