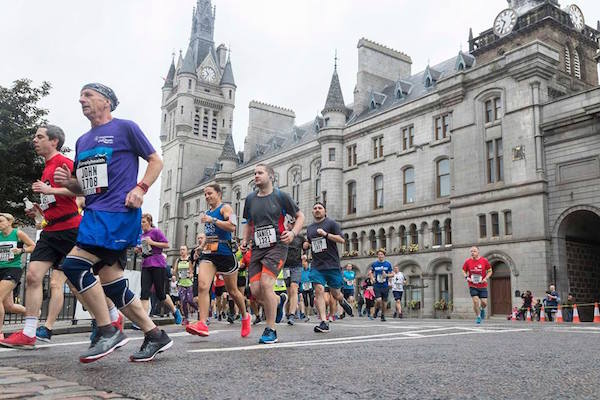 Over 5500 runners took to the streets of Aberdeen yesterday for the second annual Simplyhealth Great Aberdeen Run, passing landmarks like Brig o'Balgownie, King's College at Old Aberdeen, Marischal College and the Art Gallery along the way.

Morning rain didn’t keep away thousands of spectators hoping to catch a glimpse of family, friends and some of the country’s best runners – including Commonwealth Games bronze medallist Robbie Simpson.

This year, the Deeside runner lined up for the 10k against Scotland international Kenny Wilson (Moray Road Runners). The battle between the pair was hotly anticipated, but ultimately won by Simpson in a time of 30.01. Wilson, who won the 10k last year, had to settle for second place (31.27).

Speaking after the race Simpson said: "Everybody expected it to be a close race and some people doubted if I'd be able to win, so I’m pleased to have run as well as I did. I thought I had gone under 30 minutes but it was very close, so I can't complain. It's the fastest 10 km I've run for quite a while despite not doing any specific road training, so that's encouraging.

"I was very tired for about 10 days after Sierre-Zinal (coming second to legendary ultrarunner Killian Journet in the 31km mountain race). But I had a good session on Tuesday and I've run 100 miles this week so I know I'm in good shape as I didn't ease back for it.”

But winning the 10k wasn’t the only good result for Simpson yesterday. His girlfriend, Metro Aberdeen runner Ginie Barrand, won the ladies’ division of the same event. Barrand clinched the title in a time of 36:39, 12 seconds ahead of her Metro Aberdeen clubmate Kayleigh Jarrett.

Barrand said: "I didn't catch Kayleigh until the final kilometre and I knew I'd have to get away from her then as I was sure she'd be quicker than me in a sprint. So, I put my head down and gave it everything. I was borderline feeling sick, but I didn't look back and kept pushing on and hoped for the best. I was on a mission because I did badly here last year and wanted to make up for that."

Claire Bruce finished third in 37:21 to give Metro Aberdeen a clean sweep of the women’s podium.

Kris Jones (Dundee Hawkhill Harriers) took top honours in the Simplyhealth Great Aberdeen Run half marathon, after turning an early lead into a convincing win. The GB track and orienteering international’s time of 1.06.35 even bettered that of Robbie Simpson’s effort in last year’s inaugural event by more than two minutes.

Jones said, "I really didn't know what time to aim for, but I was pleased with my run. At halfway I thought getting under 67 minutes would be good going so I was happy to have achieved that as the second half of the course is quite tough with cobbles and hills to contend with.”

“It's a fantastic event and there was tremendous crowd support all the way, especially at the finish along Union Street. I'd definitely come back again.”

In the women’s division of the 13.1-mile event, Sheena Logan (Fife AC) powered ahead of her competitors to take the title in a near PB time of 1.21.56. She finished just under four minutes clear of second-place Katie Illife (Durham City Harriers).

Logan said: "I‘m really pleased as my time is only a few seconds slower than my best which was set on a faster course. I certainly enjoyed it. I went to university in Aberdeen, many years ago, so it has been good coming back here to do this race. It was great to run down Union Street where the crowds were amazing. I loved that. The support was absolutely fantastic.”