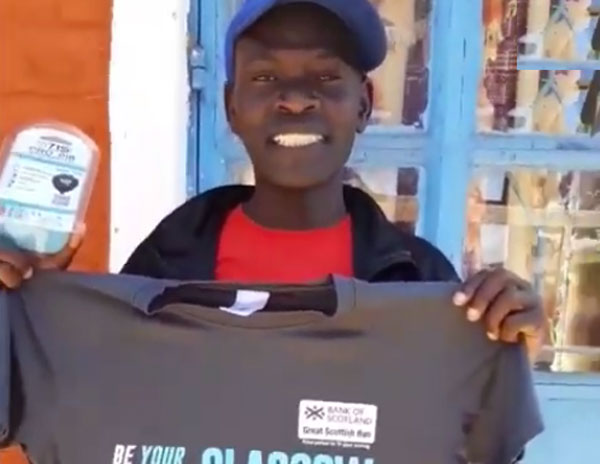 A link between a Glasgow club and Kenyan runners based in Iten, known as the 'Home of Champions', was strengthened this week with the arrival of a second consignment of clothing in the town

The connection was made initially by Glasgow-based coach Colin Thomas, who spends several weeks of the year training up and coming Kenyan athletes in Iten. The town is 2,400 metres above sea level and a magnet for runners from around the world during the winter months.

During his Kenyan visits Colin was struck by the obstacles faced by young athletes who struggled to break out of their impoverished circumstances. He compared those local conditions with the lives of people in Scotland and determined to do something to help.

Back in Glasgow, he teamed up with West End Road Runners, a relatively new club where Colin coaches and also with retailer Migo Sports. He found a very willing partner in the young Glasgow club.

West End Road Runners' Graeme Jack takes up the story: "Colin made a big impression when he talked about his Kenyan trips and when the idea of the club becoming involved in a project to source running kit to send to Africa was raised, the support was immediate and whole hearted.

"Although a young club, we were accredited by Scottish athletics in 2016, we now have a membership of around 100. Many members take part in a number of races over the year and collect multiple, often good quality T-shirts. Those tops, which can lie unused in drawers, are a godsend to runners in Iten.

"We all go a kick out of the idea that those running tees - highlighting Balfron 10K or Alloa Half Marathon - would get a new life in Kenya. There was a real enthusiasm among the members to get behind the scheme and make it work."

Colin Thomas took a small quantity of clothing when he travelled to Kenya in January and had a great response from local runners who were delighted to receive many near-to-new items. This has been followed up by a second larger consignment (25 kilo).

Both Colin Thomas and Graeme Jack believe there is the potential for a mutually beneficial relationship between Scotland and Iten. Colin is set to give a presentation at West End Road Runners about his recent trip and he regularly incorporates methods that he has honed in Kenya into his coaching sessions back in Glasgow. The pair feel that the two running communities can support each other in different ways and are keen to maintain and develop the connection.