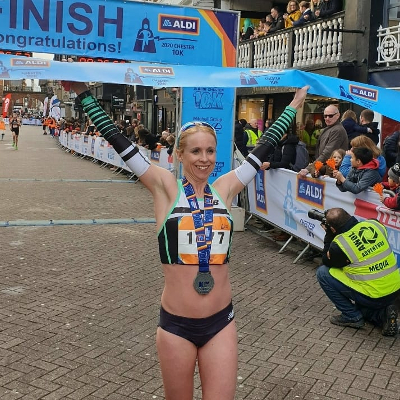 Gemma is big in the city at Chester 10K

Gemma Steel celebrated International Women’s Day by becoming the female winner at the ALDI Chester 10K yesterday (Sunday 8 March). She was given a warm welcome by the organisers and people of Chester at the third outing for this popular race from Active Leisure Events.

Gemma was amongst the elite field that started at the front of the Orange wave of runners at 9am. They were followed by the Blue wave at 9.30am. Both waves made the most of the fast city course that included the village of Mollington, town hall and cathedral with a finish on Eastgate Street with Eastgate Clock as a backdrop.

Gemma broke the tape to win the women’s race in 36:22 followed by Tessa McCormick of Vale Royal AC in 36:44 and Joanna Marsden of Ellesmere Port RC in 37:07.

Daniel Jarvis appeared to be flying as the Bedford & County AC man raced to overall victory in 29:45. Kadar Omar of Birchfield Harriers was second in 30:15 with Ian Crowe-Wright third in 30:33.

There were several gutsy performances that included stroke survivor Peter Fabian who was pushed around the course by a team from Action in the Community (ACT). Peter undertook this challenge to thank ACT for their help in his rehabilitation and he walked across the finish line to cheers from his team and the crowds.

Another was firefighter Ryan Platt who completed the 10K in his full kit and breathing apparatus to fundraise for charity Classrooms in the Clouds.

Race organiser Chris Hulse normally greets every runner at the end with a handshake, high-five or hug but with the current situation, opted for an ‘elbow pump’ instead. This was appreciated as always by the finishers.