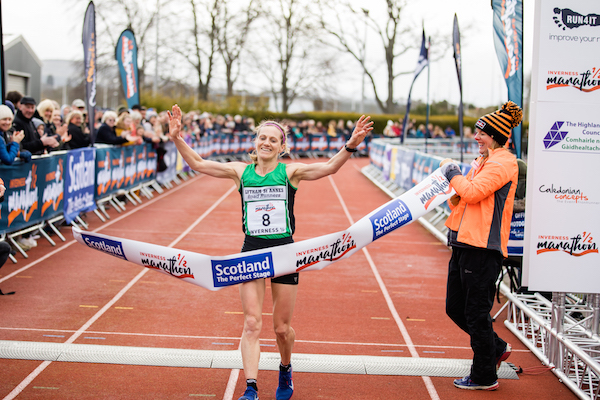 No records, just runners blown away at Inverness Half

A record field took to the start line of today’s Inverness Half Marathon, with over 2100 of the nearly 3000 runners who signed up to take part completing the event.

runABC Scotland’s Christine was one of them: “It’s great to see Inverness Half going from strength to strength, with the usual flawless organisation. The buzz both before and after the race was particularly good this year, due I think in part to how the organisers have rearranged the hall, with the podium more central.

“The route is the same, though, with the ‘warm up’ hill around mile four, and the ‘bonus’ hill round mile nine, which I always seem to forget about – despite this being the fifth time I’ve run the course. When I muttered about it to the Metro Aberdeen runner charging up it alongside me, she laughed, and said she always forgot about it too.”

Given the recent winter storms, conditions were better than they could have been – but strong wind from the south west meant particularly hard work through the early and later stages of the course.

That didn’t stop the energetic residents of Burn Road from drumming up their usual storm. “For me, they’re a definite highlight of the course, coming right when I need to dig deep and focus on the last five miles. And for any of them reading this, just because we may not be able to say thank you for the moral support – and the jelly babies – don’t think we’re not grateful for your efforts!”

While there were no runners wearing facemasks, bumping elbows or stealing loo roll, the spectre of coronavirus was still on runners minds.

“Both Inverness and the Garioch half marathon are popular London-prep runs in this neck of the woods, and many runners – myself included – weren’t quite sure how to play today: as a marathon paced training run or as the last event they’ll likely to be able to race properly in a while, something noted by the commentator, Bryan Burnett, on the start line. With current events in mind, he urged us all to enjoy today’s race and be grateful we’re all healthy, fit and able to take part.”

runABC Scotland spoke to several runners at the finish line, one of whom was Catriona Ward Sell. She travelled up from Suffolk to take part after having won a race entry on Instagram. The Vegan Runner enjoyed the race, but not being one to look at routes ahead of an event, wasn’t prepared for the hills.

“We don’t have hills in Suffolk,” she laughed. While the hills and wind resulted in a time 10 minutes slower than she would normally clock, she could see their benefits for training. “If I lived up here, I would definitely be a better runner!”

The wind and hills took their toll on the elites, too. Despite the lure of extra prize money for breaking the course records, neither Weynay Ghebresilasie of Shettleston Harriers (1.05.06) or Liz Abbott of Lytham St Annes Road Runners (1.17.53) managed to clinch the cash.

Speaking after what was his second Inverness win, Ghebresilasie said: “I tried to do my best today but it was too windy and I was on my own the whole way. I’ll now go back to Ethiopia for a few weeks to continue training for the London Marathon and try to qualify for the Tokyo Olympics.”

Scotland international Kenny Wilson tried to stick with Ghebreselasie in the early stages but soon realised that was an over-ambitious strategy and decided to focus on securing second position, which he achieved in 1.06.35. The Moray Road Runner said: “I went with Weynay for the first mile, but it was too quick a pace so I settled down and concentrated on staying ahead of the rest of the pack.

“I tried not to hurt too much running into the wind, then took advantage of the stretches when the wind was behind. At one point I thought about trying to make an effort to catch Weynay again, but he was definitely going much too fast for that. Overall I’m happy with the result, and my time, given the conditions. It’s the second quickest time I’ve done for a half marathon, so that’s fine. Now I’m looking forward to the London marathon.”

Liz Abbott successfully defended the women’s title by completing the course in 1.17.53, just over one minute slower than her 2019 winning time. She was, however, chased all the way by Metro Aberdeen’s Kerry Prise who set a personal best time of 1.18.18 to take second position.

Abbott said: “I am so pleased. I worked hard, but I enjoyed it. I found it tough on the uphill as I haven’t been able to do as much hill training as usual this winter because of the weather and at six miles my legs were burning. i didn’t taper for this race as much as I did last year, so although I’m slower, I’m happy enough with my time. I love Inverness and I’m looking forward to returning next year.”