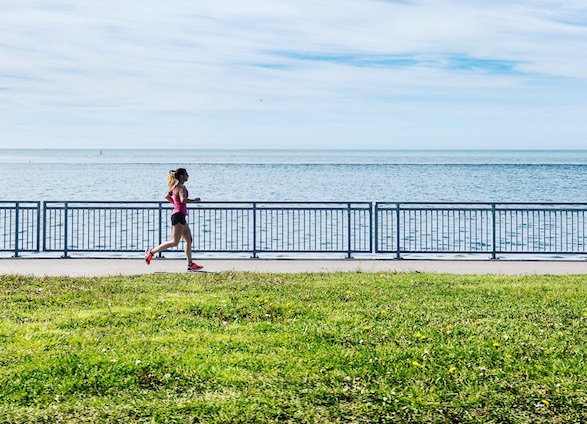 ‘20 Along the Forth: Edinburgh Marathon Edition’ (Sunday, 3 May) is, as the name suggests, a variation of Blast Running’s current ‘20 Along the Forth’, a much smaller event designed to help runners prepare for London Marathon.

While the thought of taking on a 20-mile race three weeks before a marathon might seem slightly counter intuitive, Catriona from Blast Running says that’s absolutely not the case.

As she explained to runABC Scotland online, “Are there other 20-mile races in Scotland this time of year? No there aren’t, and I think it’s a real shame. A 20-miler three weeks before whichever event you’re training for can really help you psychologically as well as physically.” Approached by 'a couple of EMF marathoners' to organise an event to support their training, Catriona was more than happy to help them in ‘the lead-up to their big one’.

As she explained, “You’re at the peak of your training before you start tapering, and that's perfect for testing out your pre-race breakfast, your playlist, your running kit and your race pace.”

Quite apart from being good preparation and a challenge in itself, committing to ‘20 Along the Forth’ might also be a good ‘Plan B’ for runners currently racking up the miles, worried that all their hard work might be for naught. In the event of London or Edinburgh marathons being cancelled, Catriona says she will add another 6.2 miles to the route to give those who want it the full distance.

Like its London-focused cousin, the chip-timed Edinburgh race will be a small event, limited to just 250 runners. Clubs and groups are more than welcome to take part, and an SA permit is pending. While all finishers will receive a goody bag – including a buff – participants who want something more to remember their efforts by also have the option of ordering an eco-friendly cherry wood finisher medal.

Early bird prices for '20 Along the Forth: Edinburgh Marathon Edition' are in force until midnight, 14 March.