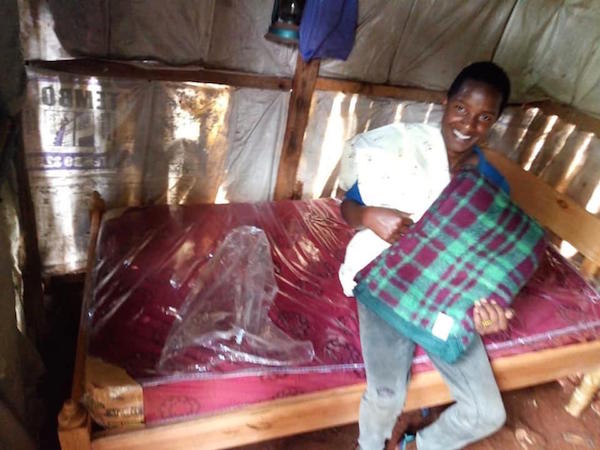 As a running club, the Fit Like Joggers don’t just support each other: they also support the future of a young boy in Africa.

Since the New Year, the Aberdeen-based club has been sponsoring David Kariuki Mwaniki, a 17-year-old schoolboy at Dedan Kimathi Memorial High School in Karatina, Kenya, through the Gathimba Edwards Foundation.

The idea to sponsor a child came from the group’s founder, David Scott, who noticed a Christmastime campaign run by the Gathimba Edwards Foundation (GEF), highlighting 12 individuals they felt were in particular need. David, left in the care of a grandmother with mental health issues, was one of them.

The young man, who shared a bed with two siblings and previously went to school without food, had recently come second in his class. As a result of his hard work, he received an invitation to attend high school but lacking the funds to pay the fees, couldn't take up the place. Despite the efforts of the community to raise funds for David’s education, they could not raise enough.

Not being able to continue with his schooling affected David badly and he was brought to the attention of the GEF team. Now, Aberdeen’s Fit Like Joggers is meeting all the payments for David’s school meals, uniform and fees for 12 months with club funds, raised through their organisation of events like the Brewdog Run. He also now has his own bed, thanks to the GEF.

Scott told runABC Scotland online: “Some people have wondered why a Scottish running club is sponsoring a child in Africa, and wondering why we don’t do something running oriented or ‘at home’.

“But there are very clear links between what we are doing both to running and to Aberdeen. The very foundation of the GEF is running, as it grew out of the friendship between Aberdeen sprinter Myles Edwards and Kenyan international Gideon Gathimba. It’s Aberdeen people working to fundraise in the UK, and it’s Aberdeen people on the ground in Kenya building houses.”

He added: “For us sponsoring David is about building a connection with GEF as a charity. It’s not just about one child; it’s about what more we can do with them over time. Who knows where that connection will take us a club? We might organise an event to raise funds exclusively for the Foundation, or we might even go over as a group to Kenya to help with some of the work there.

“With the reach of our club and the Brewdog Runs combined, we also hope that our sponsorship of David will encourage other clubs or individuals to sponsor someone, or help the GEF with their good work in Kenya too.”